The first outside contractor hired to work on the National Veterans Resource Complex (NVRC) is a veteran. Daniel MacDonald, founder and owner of MacDonald Engineering, served in the U.S. Marine Corps from 1986-1992 and is now working as a land surveyor on the future site of the NVRC . 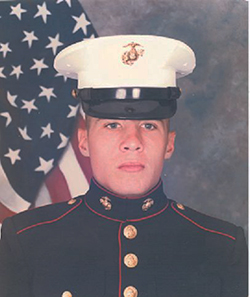 Daniel MacDonald as a U.S. Marine

Syracuse University Vice Chancellor for Veteran and Military Affairs Mike Haynie says, “It’s as it should be, that the first person hired on the NVRC construction was a veteran, because it represents our commitment to support and empower this community, the veteran and military-connected community.”

MacDonald says there has never been a project he has been more proud to work on. Of the university’s commitment to veterans, MacDonald believes that “This speaks volumes … you don’t put up a multimillion dollar building if you’re not committed.” An interview with Macdonald and Haynie can be viewed at the NVRC website.

MacDonald’s company is currently run out of Rochester. He was involved in the implementation of the Service-Disabled Veteran-Owned Small Business Act and makes hiring veterans a priority.

The NVRC at Syracuse University is conceived as a class-leading, national exemplar of academic, government and community collaboration. The NVRC will leverage a public-private sector partnership model to nurture academic research, actionable programming and collaborative thought leadership positioned to impact veterans and their families on the campus of Syracuse University, in New York State and in communities across the U.S. 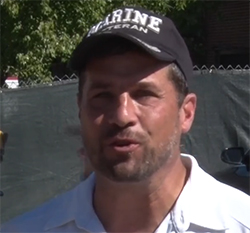 The NVRC will serve as the center of veteran life on the campus of the University, in the local community and across Central New York. The facility itself is purposefully designed as a community-convening hub, and will be accessible to community organizations, as well as local and state government partners, for the purpose of facilitating programs, trainings, events and initiatives. The NVRC will include a regional student veterans’ resource center, conceived as a one-stop shop supporting the educational needs of the region’s veterans and families. To that end, the NVRC will include classroom spaces to accommodate local and national veteran-focused programming, along with a conference center and 1,000-seat auditorium suitable for hosting community activities, lectures and national convening events and conferences.

Finally, the NVRC will be designed to include gallery space in which the university’s and national storied legacy of serving America’s veterans can be put on permanent display—and also as a platform to highlight exhibitions of art, culture and performance relevant to the veterans’ community.

Based on historical precedent and projected opportunity, current estimates suggest that the NVRC will generate more than $300 million in regional economic activity over the next five years, directly support more than 300 high-wage jobs and indirectly support job creation that will exceed 7,000 jobs over that period. In addition, the event-convening capacity created by the NVRC will support increased occupancy rates at Central New York hotels and lodging facilities, projected to be 5,000+ hotel nights annually.