The Gift that Will Last ‘Forever’ 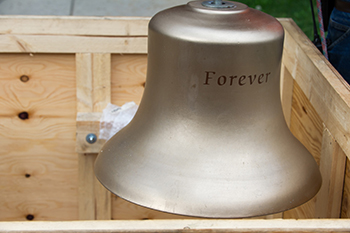 The “Forever” bell donated by Joan Kibbe as part of the Crouse Chimes Project.

Joan Kibbe was a graduate music student at Syracuse University in the early 1960s when she discovered the music of Gustav Mahler. While taking classes in what is now the Rose, Jules R. and Stanford S. Setnor School of Music in the College of Visual and Performing Arts, she studied the Austrian composer’s “Das Lied von der Erde” (“The Song of the Earth”), a symphonic song cycle that reflects the uncertainties, sorrows and fleeting pleasures experienced by mortals in life’s journey. Kibbe found the concluding text of the sixth and final song, “Der Abschied” (“The Farewell”), to be especially moving.

“The German word for ‘forever’ is ‘ewig,’ and it is repeated seven times until the music dies away to silence,” notes Kibbe.

Fast forward to 2016, when Kibbe, who earned both her undergraduate and graduate degrees in music at Setnor, was making a gift to the University in honor of her music classmate and longtime friend, Ellie Daubenthaler Felice ’60. While visiting VPA’s website, Kibbe noticed the opportunity to contribute to the Crouse College Chimes Project, which included the installation of four new bronze-cast bells, among other improvements. She decided to underwrite the cost of one of the new bells.

“It was, for me, a perfect fit,” says Kibbe. “The chimes of Crouse College, together with the Crouse auditorium (now Setnor), with its incredible ceiling, stained glass windows and iconic Holtkamp organ, plus the carved double staircase magnificently framing ‘Winged Victory,’ are the tangible heart and spirit of the building.”

Though she never rang the chimes (“Climbing ladders has never been my forte!”), Kibbe has special memories of the chimes, including one from her senior year, when she was member of the SU Symphony Orchestra under the direction of Professor Louis Krasner. As part of the 1959 Commencement festivities, the orchestra gave a performance on the evening of May 30 in Archbold Gymnasium.

“The last piece on the program was Tchaikovsky’s ‘1812 Overture,’ whose final section calls for cannon blasts and chiming bells. The windows were all open; it was a warm night,” she recalls. “This was to be a ‘first’ for us in the orchestra, including Mr. Krasner, for cannons do not attend rehearsals. At the right moment, through walkie-talkie service provided by the Army ROTC, signals were sent to Alpha Tau Omega cannoneers in Archbold Stadium and to the Delta Kappa Epsilon carillonneur in Crouse Tower, and lo and behold— it all worked! That is one of my most cherished memories of those great chimes.”

As the underwriter of a new bell for the Chimes Project, Kibbe had the opportunity to inscribe it at her discretion. She was inspired to use the word concluding Mahler’s “Das Lied von der Erde” first studied at Crouse 56 years ago: “Forever.”

“It met my desire to find a single word which in itself was neutral, yet inclusive,” explains Kibbe.

The word “forever” also brought back another special moment to Kibbe from her 1959 Commencement in Archbold Stadium.

“We instrumental music students were required to play in the band as our final obligation,” she recalls. “My parents were seated in the stadium. I will add that my mother had not been supportive of my transfer to SU from a small women’s college in our home state of Massachusetts. At one point the band played Sousa’s ‘Stars and Stripes Forever,’ with its bright piccolo solo part. When she heard this music over the amplification system, she knew I was playing one of my (and her) favorite pieces. Months later, my father confided to me that she was quite overwhelmed by the significance of the ceremony and tearfully said to him, ‘I’ll remember this day forever.’” 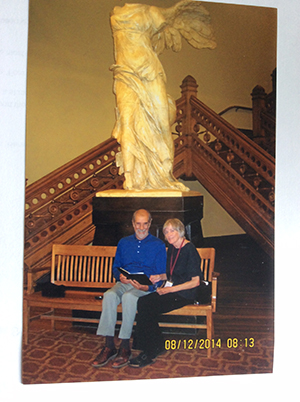 Joan Kibbe and her husband, Richard Scaramelli, sit in front of “Winged Victory” in Crouse College in 2014.

After earning her graduate music degree in 1963, Kibbe taught in Syracuse public schools for seven years, later completed a teaching certificate program from the Kodály Music Training Institute at the University of Hartford in Connecticut and spent the majority of her career teaching in public and private schools, kindergarten through college levels, in and around Keene, New Hampshire. Now retired, she and her husband, Richard Scaramelli, enjoy attending to gardens on their 19th-century homestead and contributing to civic life in their New Hampshire town. She continues to be a “forever” fan of her Syracuse education.

“It gave me a solid base of knowledge, new experiences, new friends and daily immersion in music,” she says. “The memories and influences of my extraordinary teachers have certainly contributed to my joyful and successful career as a teacher and musician of more than 40 years.”

If you, or someone you know, would like to make a lasting impact on this Syracuse University landmark, you can make a contribution to the project. We encourage alumni to donate, knowing that your gift will “ring true” for generations to come! To learn more about the Crouse College Chimes Project, please visit VPA’s giving opportunities webpage.