Veteran fundraiser will oversee all central giving teams, including Athletics and the Institute for Veterans and Military Families 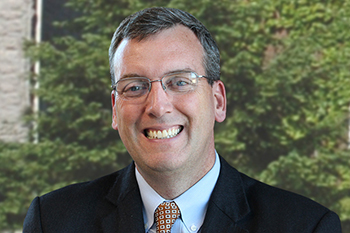 Ter Molen says Scanlon is joining the University at an exciting time and is a welcome addition to the Division of Advancement and External Affairs.

“Sean is a dynamic fundraiser, a gifted development strategist and a respected leader. We are fortunate to have him joining our team and I look forward to seeing the great things he and the team will accomplish in the months and years ahead.”

In addition to overseeing and ensuring the growth and success of all of Syracuse’s central giving teams, Scanlon will provide creative leadership to the process of identifying, cultivating, soliciting and stewarding donors, both within the internal community of faculty, staff and alumni and its external constituents and friends.

“I am honored to be joining the Syracuse University community and am thrilled to have the opportunity to work with such an incredibly passionate alumni network to advance the mission and vision of this great institution,” says Scanlon. “Syracuse University’s global reputation; its commitment to academic and research excellence; its dynamic new leadership, including Chancellor Kent Syverud, Provost Michele Wheatly, Matt and the deans at the University’s schools and colleges; its spirited students, faculty, staff and alumni are just a handful of the many reasons I feel privileged to be joining this team.”

Scanlon currently serves as associate dean for alumni affairs, development and corporate relations at Cornell University’s Johnson Graduate School of Management. In this role, Scanlon was instrumental in completing the Johnson Campaign, during which he and his team raised $193 million against a $168 million goal. He also helped grow new gifts and commitments from $22.5 million in FY15 to $35.7 million in 2016, the highest total in Johnson School history. Scanlon leads a team of 16, which includes staff—both on and off the Ithaca campus—from alumni affairs, corporate relations, annual fund, and leadership and major gifts.

Prior to his role at the Johnson School, Scanlon was senior director of development and philanthropy at Cornell University’s Lab of Ornithology, a role he held from 2008 to 2014. Scanlon’s accomplishments in this leadership position include increasing annual rate of new gifts and commitments to the lab from $6 million to $14 million; helping to create, brand and lead the $125 million Discover Campaign, which raised $163 million; and creating and implementing the lab’s national direct response program, which helped grow the lab’s donor base from 27,000 to more than 80,000.

Scanlon earned a master’s degree and finished as ABD on his Ph.D. in cultural and intellectual history at the University of Illinois, Urbana. He also has a bachelor’s degree from the University of Notre Dame. He held fellowships at Yale University, the Weston Theological Seminary and the National Endowment for the Humanities. His wife Lisa (Taylor) Scanlon grew up in Marcellus, New York, in a family full of Syracuse fans and is looking forward to introducing their children to Otto.