A group of leading young musicians who call themselves the J.A.S.S. Quartet will perform at 8 p.m., Sunday, Sept. 18, at Setnor Auditorium. The group brings a modern musical collaboration rooted in Indian classical-folk and jazz styles.

Doors open at 7:45 p.m. The event is free and open to all. Free parking is available in the Quad 1 lot, by Crouse College.

The event is organized by the Syracuse University chapter of SPIC MACAY, a nationwide movement designed to promote Indian classical music and culture. For more information and any questions about the event, contact Syracuse University’s SPIC MACAY member, Abhiram Sishtla, at asishtla@syr.edu. 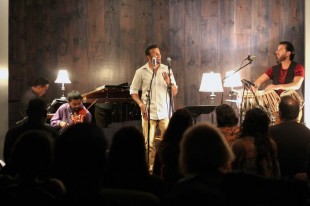 The J.A.S.S Quartet is a four-part band including vocals, piano, violin and percussion, led by vocalist Aditya Prakash. Miles Shrewsbery on tabla and cajon, Jonah Levine on keys and trombone and Shiva Ramamurthi on violin are the other members of the band. Together they bring together contemporary and traditional music in a unified space with a blend of Indian raga expositions, folk songs and classical rhythms complemented by a jazz harmonic structure.

Prakash is an American born Indian classical vocalist, specializing in Carnatic music. Deeply rooted in South Indian styles, Prakash is best known for having an emotive voice. He is trained by the Indian musical legends P.S. Narayanaswami and Palai CK Ramachandran. AT the age of 16, he was the youngest musician to tour with the sitar maestro Ravi Shankar.

Shrewsbery is a tabla artist and percussionist based in Southern California. He has performed all over the world in venues such as the Symphony Space  in New York City, Smithsonian Museum in Washington, D.C., Tokyo Museum of Modern Art in Japan, Royal Horticultural Hall in London and St. Paul Cathedral in New York City. Trained under the aegis of Sri Abhiman Kaushal and Pandit Nandkumar Bhatlouande, he specializes in Farukhabad Gharana style of music.

Levine has performed at leading jazz festivals around the world, including the Montreux Jazz Festival in Switzerland, the Monterey Jazz Festival in California and the Blues Festival with venues throughout the world. He has worked with artists like Leonard Cohen and Ed Sheeran.

Ramamurthi learned violin at the age of six from the renowned South Indian musician Shri Krishna Kutty. Currently, he is the disciple of the violin maestro Delhi P. Sunder Rajan. He has traveled to various venues throughout US and India performing in both Indian and Western Classical styles.