Landscape of Urban Education Series to Kick Off Sept. 22 with Shawn Ginwright

The Douglas Biklen Landscape of Urban Education Lecture Series will start up for the year with a talk on Thursday, Sept. 22, by Shawn Ginwright, associate professor at San Franscisco State University. Ginwright will speak on “Radical Healing in Schools and Communities” at 5:30 p.m. in Maxwell Auditorium. 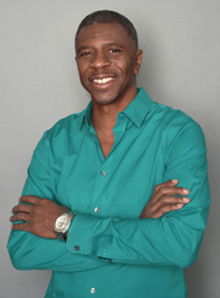 The series, which has been running since 2005, is dedicated to the presentation of current ideas and strategies for navigating urban education terrain in the United States, reflecting the School of Education’s long-running commitment to urban education. The late professor Sari Biklen was its initial organizer, and it was named for Dean Douglas Biklen after his retirement.

Marcelle Haddix, Dean’s Associate Professor and chair of the Department of Reading and Language Arts in the School of Education, has chaired the committee that organizes the lecture series for the past five years. Each year has a theme, she says, and this year’s is hope and healing.

“In response to last year’s lecture series, which focused on issues related to the school to prison pipeline, we wanted to invite speakers to campus who can encourage a community dialogue of hope and healing for our schools and communities, especially in response to the reawakening of racial violence,” Haddix says.

That sentiment led to the invitation to Ginwright to speak. He is a leading national expert on African American youth activism and development and serves as the senior research associate at the Cesar Chavez Institute for Public Policy He is the author of “Hope and Healing in Urban Education” and “Beyond Resistance! Youth Activism and Community Change.”

Ginwright blends his years of research with colorful and touching examples of how teachers, and community leaders reclaim matters of the heart to create lasting change in challenging urban neighborhoods. He vividly illustrates how strategy, logic models and plans seldom produce the transformation sought. Schools, city governments and businesses often change their policies and practices but seldom transform the hearts of people in their organizations, Ginwright says. He illustrates how schools are not simply places for learning, but rather hubs for belonging. He demonstrates that great teachers don’t simply teach, but rather saturate their students with love, hope and imagination. He inspires people to be more human in their professional lives, noting that real change often requires the breaking of paradigms and rules.

The other speaker who has been announced for the series this year is Edward Brockenbrough, associate professor in the Warner School of Education at the University of Rochester, who will speak on Feb. 9. Both speakers are co-sponsored by the Syracuse University Humanities Center.

Haddix says that other speakers and events will be added to the lineup.