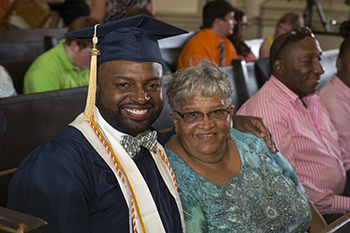 Tim Bryant with this mother, Sylvia Bryant, at his 2015 college commencement.

Despite the challenges of work, family responsibilities and a limited formative education, Bryant excelled in the academic environment at SU.  He not only made the dean’s list every semester on his way to a bachelor’s degree in public health, he also received the Chancellor ‘s Award for Public and Community Service—one of the highest honors SU bestows on a student.

One of Bryant’s latest achievements is being accepted into SU’s Ph.D. program in sociology, with four years of funding. He began the program this semester.

Bryant was recently informed by University College Dean Bea González, that he has been named University & Professional Continuing Education’s (UPCEA) Outstanding Student for 2016 in the Mid-Atlantic Region. He will accept his award at the conference in Annapolis, Maryland, in October.

This is just one more honor that has been bestowed on Bryant. In addition to the Chancellor’s Award, he received the Social Justice in Public Health Award and was named an Alumni Scholar at University College’s Commencement in 2015.  In May 2016, Bryant was awarded the David B. Falk College of Sport and Human Dynamics’ Falk College Scholar award for “academic excellence, exceptional campus and community engagement, and personal integrity.”

In his public health practicum, Bryant worked with the staff of the Street Addictions Institute Inc., collaborating on their project exploring trauma resulting from neighborhood violence.  He was also a student research associate and co-author of the paper “Neighborhood Trauma Due to Violence: A Multilevel Analysis.” The paper was accepted for publication by the Journal of Health Care for the Poor and Underserved. The article is now being used for teaching in an Upstate Hospital course for medical students.

“All of my experiences, hard work and personal achievements throughout my undergraduate journey have culminated in being accepted into the Ph.D. program in sociology at Syracuse University,” says Bryant. “My focus will be the study of the intersectionality of racial and LGBTQ health disparities and trauma due to structural violence.”

Bryant’s goal after the completion of his Ph.D. is to continue research that primarily pertains to minority and LGBTQ communities in order to directly advance policy issues that address the nexus of discrimination and trauma. “My background, my experiences, even the very painful ones, and my studies all contribute to helping me address this emerging field,” he says,