Urban Video Project (UVP) and parent organization Light Work have announced “Interzones,” a year-long program at UVP and partner organizations that will feature the work of established and emerging artists who explore exploring liminal states, haunted places and the space in between.

“Interzones” features the work of contemporary artists exploring these complex themes through their content, form and style. Featured artists include Apichatpong Weerasethakul, Marie Lorenz and Deborah Stratman, among others.

Following is an overview of the program’s main exhibitions and related events at UVP and related programming at partner organizations. 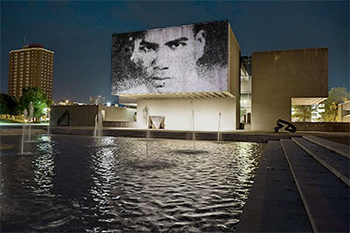 “Fireworks (Archives)” is an installation-based short-form work by internationally acclaimed Thai filmmaker and installation artist Weerasethakul. This piece acts as a counterpoint and pendant to Weerasethakul’s latest feature film, “Cemetery of Splendor,” an official selection of the 2015 Cannes Film Festival. In “Cemetery of Splendor,” a mysterious sleeping sickness besets soldiers, who are transferred to a temporary clinic in a former school in Thailand’s long oppressed and politically marginalized northeast. The memory-filled space becomes a revelatory world for housewife and volunteer Jenjira, as she watches over Itt, a handsome soldier with no family visitors. Jen discovers Itt’s cryptic notebook of strange writings and blueprint sketches suggesting there may be a connection between the soldiers’ enigmatic syndrome and the mythic ancient site that lies beneath the clinic.

The related “Fireworks (Archives)” is an abstract and intensely graphic exploration of one of the key settings for “Cemetery of Splendor,” the Sala Keoku sculpture park, which features religiously inspired, concrete sculptures of animals and gods. In this hallucinatory setting, we see the two central characters of “Cemetery of Splendor” appear, approach each other and disappear like specters in the nighttime garden amid the disorienting flash of fireworks and flares. “Fireworks (Archives)” acts as a counterpoint to the slow, sun-drenched melancholy at the heart of “Cemetery of Splendor.” For the artist, the Sala Keoku sculpture park is a manifestation of the way that an arid land and a long history of political oppression from the central government in Thailand have driven the inhabitants to “dream beyond” mundane realities—in this sense, the fantastical statues of Sala Keoku are a form of revolt. In the words of the artist, “Together they commemorate the land’s destruction and liberation.”

“Cemetery of Splendor” will screen in Hosmer Auditorium as part of the Syracuse International Film Festival, followed by a live-streaming Q&A with director Weerasethakul and reception on Thursday, Oct. 20, at 6:30 p.m. 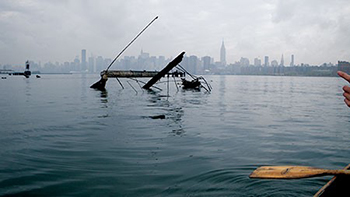 Image from “Tide and Current Taxi” (2005-ongoing) by Marie Lorenz

A collaborative exhibition of new and past works by multimedia artist Lorenz comes out of her summer 2016 sojourn on the Erie Canal in a hand-built rowboat.

Lorenz presents new video work as part of her ongoing project “Tide and Current Taxi,” which she started in 2005. Lorenz explores New York Harbor and beyond, taking participants in a rowboat built from salvaged materials to disused coastlines and inaccessible islands, and experiencing the urban environment from the rare perspective of the water. Along the way, she often collects trash that becomes material for her artwork in various media, as well as documenting her journey through social media.

This collaborative multimedia show, commissioned by the Everson Museum of Art, Light Work and Urban Video Project, is the culmination of Lorenz’s journey along the Erie Canal and the Hudson River in the summer of 2016 and brings together new works along with research, documentation and materials from the voyage on view inside the Everson and a new video work at UVP.

Lorenz’s work will also be on view in the Everson Museum of Art’s Robineau & Cloud-Wampler galleries from Sept. 24-Dec. 31.

The artist will discuss her work during an artist talk on Thursday, Nov. 17, at 6:30 p.m. at the Everson Museum of Art. Reception follows. This event is free and open to the public.

This group exhibition and related screening/talk will showcase an international selection of recent video and experimental film working in the experimental ethnographic mode to explore the ways in which traces of history haunt places and the communities that dwell in them. Panel talk and Q&A with attending artists and reception will follow the screening. 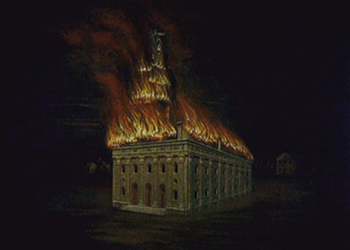 Still from “The Illinois Parables” (2016) by Deborah Stratman

During the months of April and May 2017, UVP will present recent video work by filmmaker and multimedia artist Deborah Stratman. This exhibition will be paired with a screening of her most recent long-form film, the award-winning “The Illinois Parables,” followed by a Q&A with the filmmaker and reception at the Everson Museum of Art.

“The Illinois Parables,” which premiered at the Sundance Film Festival in 2016, is an experimental documentary comprised of regional vignettes about faith, force, technology and exodus. Eleven parables relay histories of settlement, removal, technological breakthrough, violence, messianism and resistance, all occurring somewhere in the state of Illinois. The state is a convenient structural ruse, allowing its histories to become allegories that explore how we’re shaped by conviction and ideology.

Stratman is a Chicago-based artist and filmmaker interested in landscapes and systems. Much of her work points to the relationships between physical environments and human struggles for power and control that play out on the land. She has exhibited internationally at venues including MoMA NY, Centre Pompidou (Paris) and Hammer Museum in Los Angeles, and has been selected for the Whitney Biennial and festivals including Sundance, Viennale, CPH/DOX, Oberhausen, Ann Arbor, Full Frame, Rotterdam and Berlinale. Stratman is the recipient of Fulbright, Guggenheim and USA Collins fellowships, a Creative Capital grant and an Alpert Award. She lives in Chicago, where she teaches at the University of Illinois.