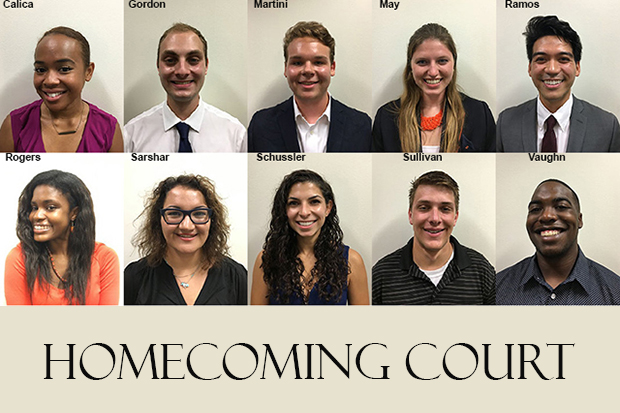 A longstanding University tradition, the Homecoming Court is comprised of seniors who represent Orange spirit in their academic, co-curricular and community involvement. Campus community members with a valid NetID can cast their vote for the Orange Central Homecoming King and Queen via the online Homecoming Court ballot. Homecoming Court Royalty will be crowned at the ‘An Evening with James Franco’ event on Saturday, Sept. 17, in Goldstein Auditorium.

Khianna Calica
Major: Television, Radio and Film
Hometown: Seattle, Washington
“Traveled 3,000 miles from home to attend SU, trained by the United States Marine Corps, worked in the Latin American film industry, and interned with an Emmy-winning writer, all while gaining clarity of my purpose and the type of woman I aspire to be.  These experiences have given me humility, self-discipline and relatability—traits any quality queen should possess.”

Jonathan Gordon
Majors: Broadcast and Digital Journalism, Political Science and Spanish
Hometown: White Plains, New York
“Jonathan is a broadcast and digital journalism major that is most proud to be a three-year resident advisor. He is the assistant sports director at Z89 and the director of broadcasting for the SU Men’s Hockey team. In his free time, he loves to cook and watch the New York Mets. Jonathan makes a great candidate for homecoming king because of his dedication to helping others before himself.”

Andrew Martini
Major: Public Relations
Hometown: High Bridge, New Jersey
“Through organizations like First Year players and Orange Appeal, SU has given Andrew Martini the roots to grow and the wings to fly. His time on campus has been marked by making people get up and dance and laugh, some of his favorite pastimes. During his time here, Andrew has added his own special flair to Syracuse Pride.”

Jennie May
Majors: Public Relations, Marketing, Supply Chain Management
Hometown: Jacksonville, Florida
“Why would anyone leave Florida for Syracuse? For Jennie May, it was to meet new people and become involved on a vibrant campus. Since 2013, Jennie has bled Orange on campus and around the world. You can always count on Jennie to be in orange and blue while leading campus tours, editing in Newhouse and working in Whitman.”

Andrew Ramos
Major: Bioengineering
Hometown: San Diego, California
“Through my involvement in Professor Soman’s and Professor Bilousova’s research labs, Engineering World Health, Ernie Davis and Haven residence halls, the Academic Excellence Workshop facilitators, LitePack Filtration and the 2016-2017 Remembrance Scholars, I have formed relationships with amazing individuals. It’s these profound connections that lead to my excellent fit for king—I seek to connect and foster SU’s unique, orange community—and the relationship and experiences I’ve had have prepared me to do so.”

Miracle Rogers
Majors: Health and Exercise Science and Bioengineering
Hometown: Miami, Florida
“Miracle aspires to be an orthopedic surgeon. She spent the summer working with the Olympic Medical team in Rio. She is a Gates Scholar, McNair Scholar and Remembrance Scholar. She motivates youth, women and minorities to succeed in STEM.  She served as president of the Rebecca Lee Pre-Health Society and NSBE. As homecoming queen she will thrive to inspire others.”

Nedda Sarshar
Majors: Writing and Rhetoric, Citizenship and Civic Engagement, and Policy Studies
Hometown: Toronto, Canada
“In four years, I found a home as the 2017 Class Marshal, a Remembrance Scholar, an intern for the Women’s Leadership Initiative, an RA, president of the Residence Hall Association, Board of Trustees Student Representative and brother of Alpha Phi Omega. I have a major in Orange Spirit, and homecoming court is my capstone.”

Beth-Elle Schussler
Majors: Nutrition and Psychology
Hometown: Walnut Creek, California
“I am a California, Bay Area native who found her home at Syracuse University. Be it through a volunteer spring break trip, a college campus tour, or a home-cooked meal, it is my mission to spread that same sense of belonging through every opportunity given to me here. As part of homecoming court, we all can represent Syracuse together!”

Liam Sullivan
Major: Newspaper and Online Journalism
Hometown: Chester, New Hampshire
“I believe I make a strong candidate for homecoming king because of my well-rounded experiences and passion for leaving SU better than I found it. I’ve been an Orientation Leader, president of Phi Delta Theta fraternity, wrote for The Daily Orange and more, but I’m most proud of simply being part of something bigger than myself—the Orange family.”

Bilal Vaughn
Major: Systems and Information Science
Hometown: Atlanta, Georgia
“Hailing from Atlanta, Georgia, I believe that I am no ordinary Orangeman. I have helped create a dynamic mentorship organization encouraging Syracuse students to follow their dreams, as well as supporting my team on to victory as a senior cheerleader this year. In my time at SU, I have discovered we are a family, no matter how different we each may be.”