La Casita Cultural Center, a program of the College of Arts and Sciences, kicks off Hispanic Heritage Month (Sept. 15-Oct. 15) with back-to-back events devoted to Latinos in baseball and to a themed community collective called “¡Familia!,” taking place in its “Balcón Criollo” gallery. 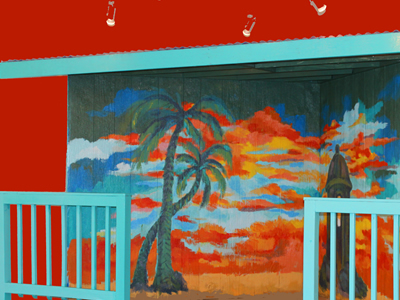 The first event is an opening reception for the “Balcón Criollo” (“Creole Porch”) exhibit, co-hosted by former Major League Baseball players Carlos Baerga and Cándido “Candy” Maldonado, on Thursday, Sept. 15, at 6 p.m. Both players will be in attendance at the reception and at a panel discussion, the following day at 10 a.m., about Latinos in the sport.

Events are free and open to the public; however, seating is limited for the panel discussion. For more information or to RSVP for the discussion, call 315.443.2151.

The show also is part of “Latinos and Baseball: In the Barrios and the Big Leagues,” a national community collecting initiative involving La Casita and the Smithsonian Institution’s National Museum of American History, done in collaboration with the Smithsonian Latino Center.

La Casita is partnering with the National Baseball Hall of Fame (NBHF) on the initiative.

“This is one of our most exciting times of year,” says Tere Paniagua ’82, executive director of A&S’ Office of Cultural Engagement for the Hispanic Community. “Hispanic Heritage Month honors a rich legacy and culture, and recognizes the local and national contributions of Hispanic and Latino Americans. From sports to government to entertainment and community life, we play an important role in U.S. history, culture and values.”

The “Balcón Criollo” exhibit features nearly a hundred community-sourced photographs, memorabilia and objects, showcased in a porch-like corner installation and along the walls of the center. 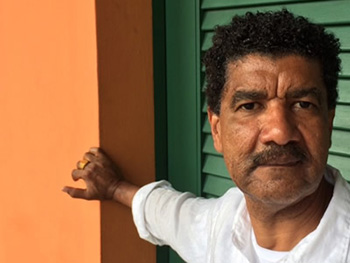 This year’s show is a nod to Pepón Osorio, a renowned Puerto Rican installation artist and scholar at Temple University, who inspired the installation design of the “Balcón Criollo” at La Casita. “This project captures the spirit of Osorio’s art, which uniquely bridges museum installation and field-based social practices,” Paniagua says.

The reception will include live music, traditional tapas and refreshments.

As the title suggests, the “Balcón Criollo” exhibit revolves around a wooden porch, where families often gather to share stories, drink coffee or watch their children play outside.

“The porch is literal and figurative because it’s the part of our home where we connect with our community,” Paniagua says. “This year, the porch walls feature a new mural by local artist and Westside resident Juan Cruz ’96.”

The exhibit, which has been expanded into a year-round project, is on display weekdays, from noon to 5 p.m.

The panel discussion, “Latinos in Baseball: From the Barrios to the Big Leagues,” runs from 10 a.m. to noon. Myrna García Calderón, associate professor of Spanish and director of Latino-Latin American studies, will moderate a program featuring Adrian Burgos, professor of history, African American studies and Latina/Latino studies at the University of Illinois at Urbana-Champaign; Mireya Loza, curator of political history at the National Museum of American History; John Odell, curator of history and research at NBHF, as well as lead curator of its ongoing “¡Viva Baseball!” exhibit; and Baerga and Maldonado.

Paniagua says the program will investigate baseball as a “social and cultural force” within U.S. Latino communities. The discussion will be followed by an informal luncheon and then a “digitization” event, where the public is invited to bring Latino-related items to be scanned, photographed and catalogued for La Casita’s archives. Digitizing is provided at no cost, and is not limited to baseball-related pieces.

“Baseball is a way of celebrating our identity,” Paniagua says. “In addition to building community, the history of the sport addresses race and diversity issues. Never before has there been a greater number of Latinos on the field, in the clubhouse and in the stands.”

Case in point: Baerga and Maldonado, who are being honored during their visit, are among the game’s most famous Puerto Ricans.

A member of the Cleveland Indians Hall of Fame, Baerga was the team’s second baseman from 1990 to 1996 and again in 1999. He also was a reliable pinch- and switch-hitter, becoming the first major league player to hit a home run from both sides of the plate in the same inning—a feat accomplished in 1993.

After guiding the Indians to the 1994 World Series (in which they fell to the Atlanta Braves), Baerga was traded to the New York Mets in 1996, and, two years later, was granted free agency. The three-time All-Star went on to play for the Arizona Diamondbacks, San Diego Padres, Washington Nationals and Boston Red Sox. 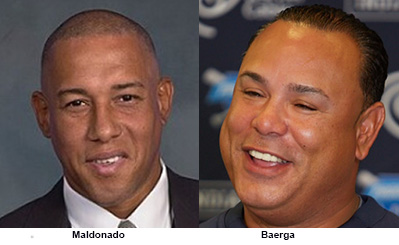 Like Baerga, Maldonado enjoyed a 14-year run in the majors. The “Candyman” played for nine different teams, three of which saw action in eight different postseasons. He is often remembered for his contributions to the San Francisco Giants in the late ’80s and the Toronto Blue Jays in the early ’90s, when they clinched the 1992 World Series. It was during Game 3 in Toronto that Maldonado struck the first game-winning hit in World Series play outside the continental United States.

A member of the Caribbean Baseball Hall of Fame and Puerto Rico Hall of Fame, Maldonado was a gifted outfielder and hitter. He was the 16th player in Giants history to hit for the cycle (1987), the only Giant to smack a triple in the World Series (1989) and the first Indian to score at Cleveland’s Jacobs Field (1994). Today, he is an ESPN analyst and the general manager of a team in the Dominican Republic Professional Baseball League.

“Balcón Criollo” is co-sponsored by A&S, the Smithsonian, AXA, Crowne Plaza Syracuse, Phi Iota Alpha, CNY Latino Newspaper and Hispanic Syracuse. Other events and activities will be announced throughout the fall.