The Syracuse University Human Rights Film Festival (SUHRFF) brings an outstanding line-up of critically acclaimed films addressing social justice issues around the globe to Central New York, Sept. 29-Oct. 1. Now in its 14th year, the festival is part of Syracuse Symposium 2016: PLACE and is presented by the SU Humanities Center in the College of Arts & Sciences and the S.I. Newhouse School of Public Communications. All screenings are free and open to the public.

All films are either closed-captioned or subtitled in English. Computer Assisted Real-Time Translation (CART) will also be available at all screenings for the introductions and discussions. If you require other accommodations, please contact Kristen Northrop (kmnorthr@syr.edu, 315.443.7358) by Sept. 15. 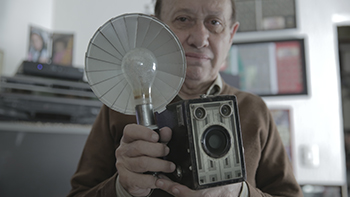 Still from “The Man Who Saw Too Much”

The festival opens on Thursday, Sept. 29, at 7 p.m. in Joyce Hergenhan Auditorium, Newhouse 3, with a screening of “The Man Who Saw Too Much,” directed by Trisha Ziff. Winner of two Ariel Awards (the Mexican Academy Awards), Ziff’s film builds a compelling portrait of Enrique Metinides, who has spent his life documenting death in Mexico City as one of its most renowned and notorious photojournalists. An internationally renowned curator and filmmaker, Ziff screened her previous film, “The Mexican Suitcase,” at SUHRFF in 2012, and is currently working on a documentary about painter and SU emeritus professor Jerome Witkin and his twin brother, the photographer Joel-Peter Witkin.

“We’re delighted to be able to bring back Trisha Ziff to open our festival,” says Roger Hallas, associate professor of English in the College of Arts and Sciences and co-director of the festival, “as her incredible new film about photographer Enrique Metinides not only offers fascinating historical insight into Mexico City and its tabloid culture; it also poses important political and ethical questions about our responses to images of death.” 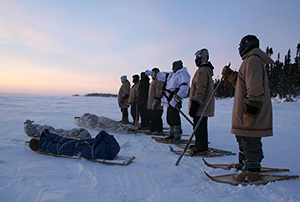 Still from “Trick or Treaty?”

The theme of place further resonates in “Trick or Treaty?,” which screens on Friday, Sept. 30, at 7 p.m. in Shemin Auditorium, Shaffer Art Building. Directed by legendary Canadian and Abenaki filmmaker Alanis Obomsawin, the film documents the inspiring resurgence of the indigenous rights movement in Canada, which is challenging the longstanding settler colonialist interpretations of key land treaties. Obomsawin will introduce and discuss the film with Scott Manning Stevens, director of the Native American studies program. She will also talk about her filmmaking, art and activism on Saturday, Oct. 1, at 11am at the Skä•noñh-Great Law of Peace Center, 6680 Onondaga Lake Parkway in Liverpool. 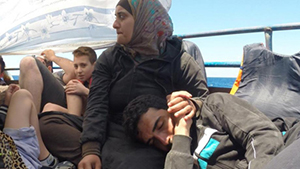 Still from “The Crossing”

SUHRFF2016 continues on Saturday afternoon with “The Crossing,” a documentary about the perilous journey undertaken by Syrian refugees seeking shelter in Europe. “We are very fortunate in Syracuse to live among a thriving community of refugees from many different conflict regions around the world. Some of them will speak at a panel discussion following the screening. We have to always keep in mind that human rights begin at home,” notes Tula Goenka, associate professor of television, radio and film in the Newhouse School and co-director of the festival, “and it is vital to provide local perspectives on this urgent global crisis.”

Full information can be found on the festival website: suhrff.syr.edu

Winner of two Ariels (Mexican Academy Awards), Ziff’s enthralling documentary follows Enrique Metinides, who has spent his life documenting death in Mexico City as one of its most renowned and notorious photojournalists. Introduction and Q&A with the director

Legendary Canadian and Abenaki filmmaker Obomsawin’s inspiring documentary reveals how collective challenges to the settler colonialism’s historical interpretations of key treaties can bring political empowerment to indigenous communities as they fight for the protection of their lands and their natural resources. Introduction and Q&A with the director

Obomsawin will also talk about her filmmaking and activism at the Skä•noñh – Great Law of Peace Center at 11am on Saturday, Oct. 1. For more details, please visit the center’s website: www.skanonhcenter.org

Following one of the most dangerous journeys of our time with a group of Syrian refugees fleeing war and persecution, this vivid documentary offers an intimate perspective into their harrowing experiences. The screening will be followed by a panel discussion with young refugees living in Syracuse. Screening co-sponsored by the Moynihan European Research Center. 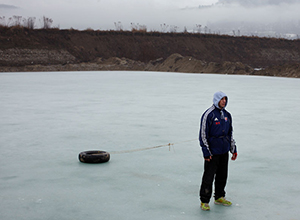 In a subtle fusion of documentary and fiction, this critically acclaimed debut feature follows a middle-aged Roma boxer in Slovakia as he embarks on a tragicomic return to the ring in order to pay for his girlfriend’s abortion. The screening will be followed by Skype Q&A with filmmaker Ostrochovský.

Mehta’s acclaimed drama tenderly illuminates same-sex desires in contemporary India through the true story of a professor (Manoj Bajpayee) suspended from Aligarh University after being caught in a sting operation.

A young Ghanaian man struggles to reconcile his mother’s expectations and his same-sex desires.