Ambassador James B. Cunningham to Speak on ‘Afghanistan, Violent Islamic Extremism and America’ 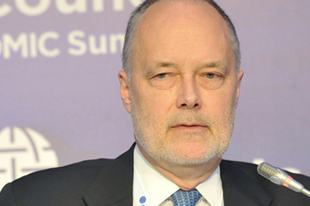 James B. Cunningham ’74, former U.S. ambassador to Afghanistan, Israel and the UN, will discuss “Afghanistan, Violent Islamic Extremism and America” at the Maxwell School of Citizenship and Public Affairs. Cunningham, currently a senior fellow in the Atlantic Council’s South Asia Center, will discuss challenges posed in the greater Middle East to the United States and international community. He will review mistakes made since 9/11 and argue that—particularly in today’s political atmosphere—America needs serious discussions that lead to a long-term, sustainable strategy in the region.

The event, part of the University’s Orange Central events, will take place on Friday, Sept. 16, at 2:30 p.m. in Maxwell Auditorium. The lecture is free and open to the public. No R.S.V.P. is required, but please arrive early for the best seating.

The event will also be available via live stream at http://maxwell.syr.edu/cunningham.

Ambassador Cunningham joined the Atlantic Council in May 2015 as a senior fellow in the South Asia Center and the Khalilzad Chair, and in May 2016 became a non-resident senior fellow. He has served as ambassador and deputy ambassador to Afghanistan, ambassador to Israel, consul general for Hong Kong and Macau, and ambassador and deputy permanent representative to the United Nations in New York, and served as acting permanent representative to the United Nations for the first nine months of 2001, including on 9/11.

After early tours in Stockholm, Washington, Rom, and the U.S. Mission to NATO, Cunningham was selected by NATO Secretary General Manfred Woerner as his chief of staff, serving as an advisor to the secretary general on all NATO issues in the context of nuclear disarmament in Europe, the collapse of the Berlin Wall and the reunification of Germany, and the impending dissolution of the Warsaw Pact and the Soviet Union.

After Iraq invaded Kuwait in August 1990, Cunningham became deputy political counselor at the U.S. Mission to the United Nations. He served as the deputy director, then as director of the State Department Office of European Security and Political Affairs. He was deputy chief of mission at the Embassy in Rome from 1996 to 1999.

Ambassador Cunningham will be a 2016 recipient of the George Arents Award, Syracuse University’s highest alumni honor presented annually to alumni who have made outstanding contributions in their fields. The award will be presented at the Arents Awards dinner on Friday, Sept. 16. For more information visit http://orangecentral.syr.edu/awards/arents-award/index.html.