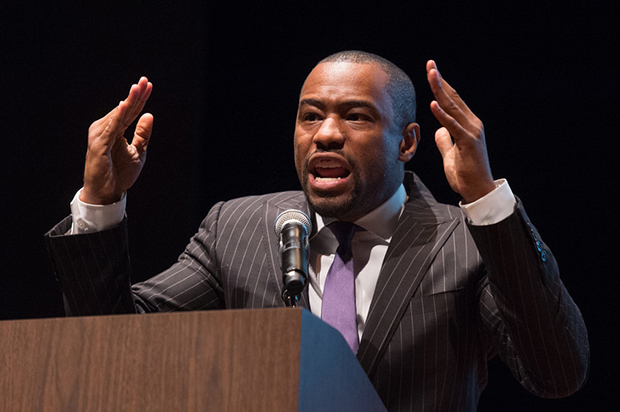 Keith Alford stood at the dais in Goldstein Auditorium, wearing a kind of astonished smile. More than 1,000 audience members had just dropped into their seats after giving a standing ovation to Dr. Marc Lamont Hill, the journalist and author who delivered the keynote address at the first Syracuse University Symposium on Race and Our Communities: Race, Justice, Violence and Police in 21st Century America.

Alford, director of the university’s School of Social Work and moderator of the program, thanked Hill for his “powerful words”—and then asked the five panelists on stage if they could offer a concise response.

They smiled back. Concise would not be easy.

Hill, Distinguished Professor of African American Studies at Morehouse College and host of HuffPost Live, BET News and VH1 Live, had offered a passionate, provocative anthem for change. He went through a high-profile timeline of African Americans shot to death by police or lost in custody over the past few years. He began his speech by recalling how the body of 18-year-old Michael Brown was left in a street in Ferguson, Missouri, for hours, “like he didn’t belong to nobody,” comparing that act to the way lynching victims were left hanging, as public statements. Hill lamented what he described as reflexive victim-blaming in America as an excuse for perpetuating state violence.

“We live in a world,” he said, “where victims have to be perfect, they have to be respectable, they have to be blameless.” Yet he called for simply remembering why each individual was actually stopped or confronted, to begin with: Michael Brown, for walking in the street. Eric Garner, for selling loose cigarettes. Sandra Bland, for failing to use a turn signal—and refusing to put out a cigarette. Tamir Rice, for carrying a toy pistol. Philando Castile, because he reached for his wallet. 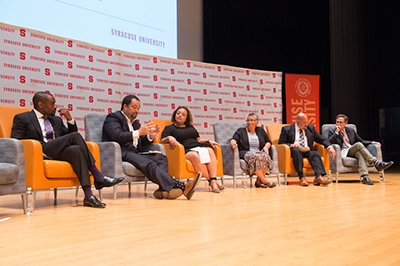 The other panelists listen as former NAACP President Benjamin Jealous makes a point.

“These are not capital crimes,” Hill said. He said it is a myth, a diversion, to believe those victims could have somehow changed their own fates. In the system as it exists, he said, you “cannot behave your way out of state violence.”

Hill was appreciative of the symposium and acknowledged Syracuse University is one of a small percentage of universities having this important conversation. “You might take for granted that this happens everywhere, but it does not”—but spared few institutions in his call for creating “the world that is not yet.” He told young people they need to be willing to join organizations, to work hard at humble tasks, if they want to generate change. He told them they have to “resist in ways that make the university uncomfortable. … You have to resist in ways that force this university to be better.”

The emotional peak of the evening arrived when one of the many students in the audience, broke into tears during a question-and-answer session. The student asked the panel why it is so hard for so many Americans to discuss questions of racial and cultural inequality, why so many people seem to show “a complete disconnect.”

“I don’t understand why everyone has lost their sense of humanity,” said the student, who wondered out loud if anyone would take seriously the grief or isolation of one student.

In a sense, that was the core message of the event.

The evening also featured an engaging and, at sometimes lively, panel discussion with panelists: Bea Gonzalez, dean of University College and special assistant to the chancellor; Benjamin Jealous, former president of the NAACP, a venture capitalist and civil rights leader; Tony Callisto, senior vice president and chief law enforcement officer at Syracuse University; Jordan Shelby West, a Ph.D. student in cultural foundations of education and coordinator of the Conversations about Race & Ethnicity (C.A.R.E.) Dialogue Program; and Keith Bybee, a professor in the College of Law and the Maxwell School of Citizenship and Public Affairs, and director of the institute for the Study of the Judiciary, Politics and the Media.

They shared insights about failures in “broken windows” policing, about the extent of mass incarceration in the United States and about the status and struggles of young people of color, on campus. In summary, Jealous warned that profound changes in American policing will take years, recalling the long journey toward eliminating lynchings in the United States. To make a difference, he told the audience, requires a lifetime of commitment.

“Prepare yourself for a marathon,” he said. “This will not be a sprint.”

The seminar was organized by a team of students, faculty and staff. Barry L. Wells, special assistant to Chancellor Syverud and co-chair of the Chancellor’s Workgroup on Diversity and Inclusion, led the effort at the request of Chancellor Syverud. The symposium is just one of many of the University’s initiatives to promote an inclusive, diverse atmosphere on campus. Information on upcoming events, dialogue sessions and other efforts to promote diversity can be found at http://diversity.syr.edu.