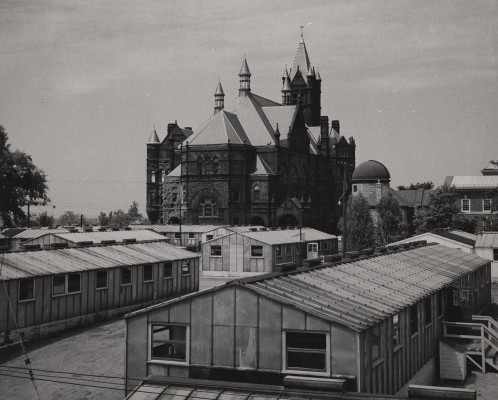 A photo of Crouse College and temporary structures from the “Our Doors Opened Wide: Syracuse University and the GI Bill, 1945-1950” exhibition

Between 1945 and 1950, the Servicemen’s Readjustment Act of 1944, commonly known as the GI Bill, supported some 2.3 million students nationwide. Few universities in the country were more closely identified with the GI Bill than Syracuse University. Chancellor William Tolley promised servicemen and women that there would be places waiting for them at the University when they returned, and enrollment more than tripled in the years immediately after the war. Although still a small university by national standards, Syracuse ranked first in New York State and 17th in the country in veteran enrollment.

The exhibition features an array of materials from University Archives that document this critical period in the University’s history and the associated changes to the campus landscape, social and cultural life, and academic programs. Materials on view include:

An opening reception will be held in conjunction with Orange Central on Thursday, Sept. 15, from 4:30-6 p.m. in the gallery on the sixth floor of Bird Library.