Project made possible thanks to the generosity of alumni, friends and supporters 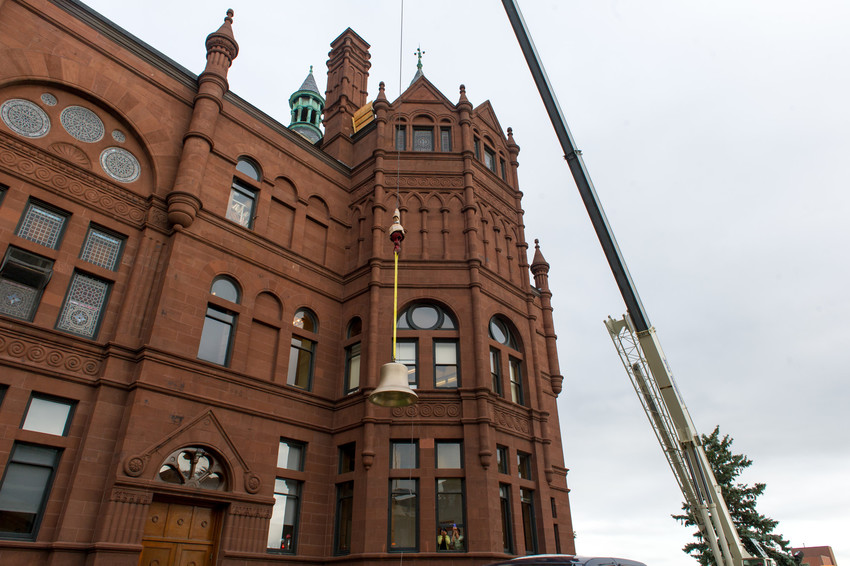 Crews raise one of four bells to be installed in Crouse College. Photo by Steve Sartori

Timerman thought about what songs she might include in her repertoire now that an expanded range of music can be created with the addition of four new bells to the current 10.

“There’s a lot of patriotic songs that we had been asked to play but the chimes didn’t have the capacity,” said Timerman, a music industry major in the Setnor School of Music in the College of Visual and Performing Arts. “Now I’m looking forward to arranging some standard patriotic songs—like the ‘Air Force Hymn.’”

The potential for more melodies to lilt across campus each weekday—and for special events—has grown considerably with the addition of the new bells. The work to add the four bells to the tower’s current 10 bells is part of summer construction projects among the many elements of the Campus Framework. 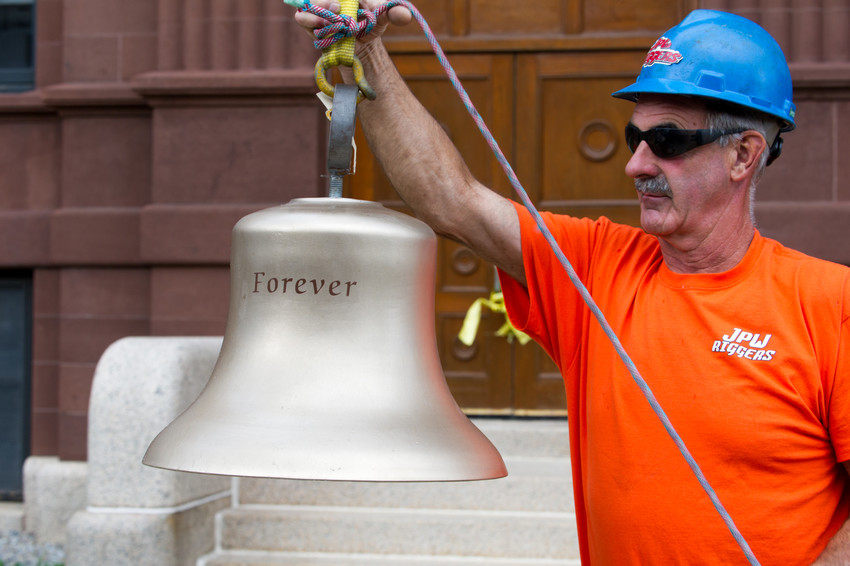 A worker attaches one of four bells to be installed in the Crouse College tower Thursday. Photo by Steve Sartori

The project, which has received support from alumni and other friends, includes the installation of the new bells, maintenance on the existing bells and structural supports, and installation of a programmable automatic chiming system that could operate while students are away on break and chiming of bells on the hour or quarter hour.

“There are three higher bells that are being added to the collection and then there is one lower bell that will significantly help expand our catalogue,” said fellow Chimemaster Carolyn Goldstein ’16, G’17, who majored in violin performance and is in the Janklow Arts Leadership Program. “There is music out there that is written for 14 bells so now we can definitely tap into those songs.”

The Chimemasters, an undergraduate student organization, has been playing the chimes since 1989; the members give life to the bells three times a day, five days a week during the semester. Selections can include anything from church hymns to Bach to Katy Perry and the Beatles; most arranged by students to fit the range of the ten bells. A platform in the tower holds a bank of levers that the musician forcefully pushes down to make the chimes sing.

The bells, of which the first nine were purchased by Trustee John Crouse, have been part of the tower since 1889, when the college was constructed.

Over 125 years later, Timerman and Goldstein were among many who watched as workers maneuvered a large crane to carefully lift each precious bell into the tower where another worker awaited. 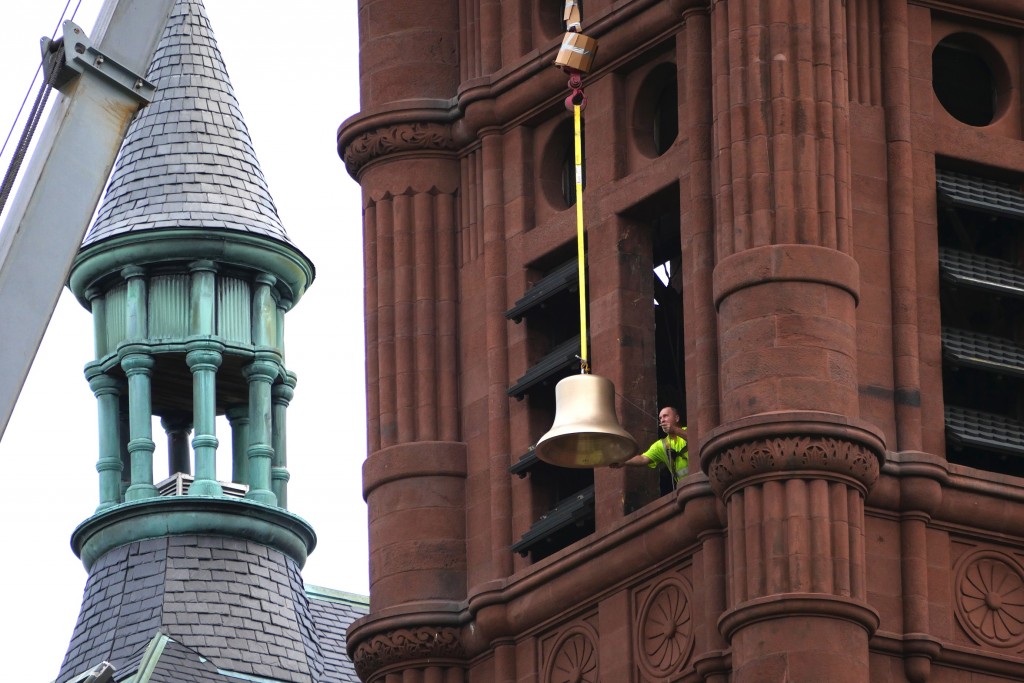 One of four new bells for Crouse College is gently moved into the tower. Photo by Amy Manley

The College of Visual and Performing Arts (VPA), in collaboration with the University’s Division of Advancement and External Affairs, recently launched the “Crouse College Chimes” giving project to help support the improvements.

“These new bells are a wonderful addition to such a cherished building. They will enhance the longstanding tradition of student music at Syracuse and add to the wonderful melodies heard across campus every day during the academic year,” says Chancellor Kent Syverud. “The initial financial support from alumni has been important to the chimes expansion. This is a great opportunity for other alumni and supporters to contribute to such a meaningful and historic project.”

The bells—the largest weighing 1,100 pounds—were made at a foundry in Holland; the same foundry that recently made most of the new bells for Notre Dame Cathedral in Paris.

Still on summer break, Timerman came to campus Thursday to see this special occasion. “I live about an hour north. This is a huge event so I just had to make the trip down here to see it happen,” she says.

It was a special moment as well for the Chimemasters faculty advisor Joseph Downing, associate professor of music composition, theory and history in the Setnor School of Music.

“It’s just very exciting to see this,” Downing says. “With just having the ten bells, it was like having only ten letters—you can write poetry but you can’t express everything you want to. Now it’s all about the possibilities.” 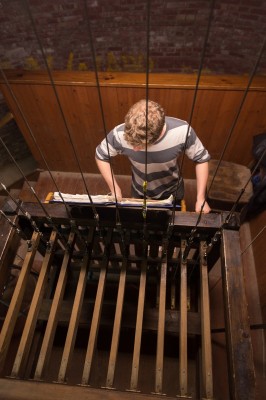 Alex Ganes ’15 plays on the chimes during his time as a Chimemaster in this 2014 file photo. Photo by Steve Sartori

For Downing, he looks forward to hearing the University’s alma mater played with the new set of bells.

“We could play the alma mater before but now we can play it in three keys, instead of just one key. We can play it a lot fancier and we can modulate it and do variations,” Downing says.

The idea for more bells has been a discussion for a long time, but more recently former Chimemaster and University Scholar Alex Ganes ’15 got more people involved in making it a reality.

“Chimemasters has advocated over the years and they’ve really shown the administration how important the bells are to the ethos of Syracuse University and the spirit of the place,” Downing says.

Even though she finished her undergraduate degree, Goldstein is glad her fellow Chimemasters allowed her to continue in the group and experiment with the new setup—and continue playing the music that not only touches the campus but the surrounding community.

Although there will be a lot of new music to try, Goldstein’s favorite to play has been the Christmas hymn “Carol Sweetly Carol.”

“It was the first piece played at the chimes’ inaugural concert in June when it was first dedicated,” Goldstein said. “It is a lovely piece to play.”

Timerman doesn’t have one favorite piece but she does have a favorite time to play—the 8 a.m. chimes.

“People will send notes that they really enjoyed the chimes in the morning coming to work,” Timerman said. “I love that because no one knows I’m doing it but people are enjoying it. I feel like I’m starting someone’s day and hopefully I’m starting it on a good note.” 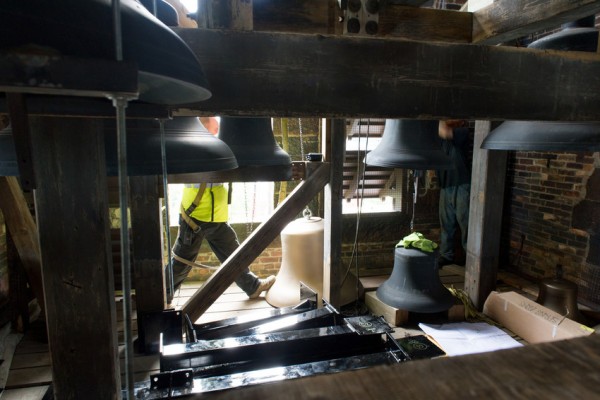 Workers pull in one of four bells to be installed inside the Crouse College tower. Photo by Steve Sartori

If you, or someone you know, would like to make a lasting impact on this Syracuse University landmark, you can make a contribution to the project. We encourage alumni to donate, knowing that your gift will “ring true” alongside the Crouse bells for generations to come!

During Orange Central, alumni members of the Chimemasters are heading back to campus and several events are scheduled. View the Orange Central website to see how they are celebrating and how to join in.