SUArt Galleries Presents ‘About Prints: The Legacy of Stanley William Hayter and Atelier 17′ 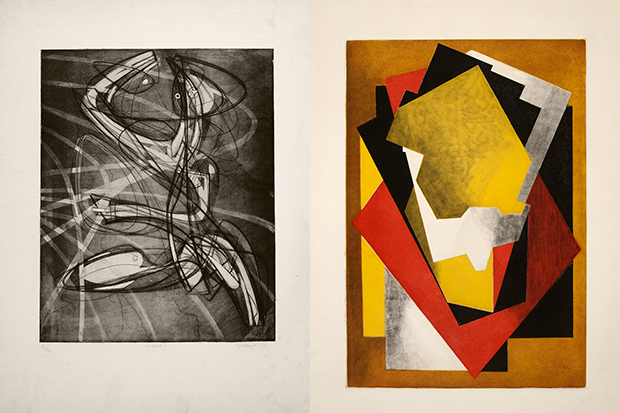 The Syracuse University Art Galleries is presenting “About Prints: The Legacy of Stanley William Hayter and Atelier 17.”  Curated by Domenic J. Iacono, director of the Syracuse University Art Galleries and member of the Print Council of America, this monumental exhibition brings together for the first time artists, and in many cases the actual print itself, illustrated in “About Prints,” the 1962 publication by Stanley William Hayter. The exhibition features over 80 original works on paper, highlighting a variety of printmaking techniques such as engraving, etching, aquatint and other experimental processes by master printmakers such as Mauricio Lasansky, Pablo Picasso, Karl Schrag, Henri de Toulouse-Lautrec and Stanley William Hayter.

The exhibition will be on view Aug. 18-Nov. 20 in the Shaffer Art Building. Gallery hours are Tuesday-Sunday, 11 a.m.-4:30 p.m., and Thursdays 11 a.m.-8 p.m. The gallery is closed on University holidays. The SUArt Galleries will host a gallery reception from 5-7 p.m. on Thursday, Sept. 8. Patrons are welcome to view the exhibition until the gallery closes at 8 p.m. The reception is free and open to the public.  A fully illustrated exhibition catalogue, complete with new research by exhibition curator Domenic Iacono, will be available for sale in the Gallery Shop.

In addition to the exhibition, the SUArt Galleries will host “Atelier 17: A Gathering Place for Avant-Garde Artists” on Sept. 23- 25. This three-day event includes a symposium that will bring leading print curators and scholars to Syracuse to discuss the legacy of S. W. Hayter and Atelier 17.

The symposium will also feature a print fair with leading galleries from the International Fine Print Dealers Association (IFPDA) in attendance.  The exhibiters include Susan Teller Gallery (New York City), Dolan Maxwell (Philadelphia), The Annex Galleries (Santa Rosa, California), The Old Print Shop (New York City), Thomas French Fine Art (Fairlawn, Ohio), and Lake Effect Editions (Syracuse University).  One session of the symposium will be for students and other attendees to ask questions of the print dealers concerning the role they play for collectors and other issues that may be important to contemporary collecting. Organized by Iacono, the panel and print fair are presented in collaboration with the Syracuse University Humanities Center in the College of Arts and Sciences, organizer of the 2016 Syracuse Symposium™ “Place.”

In 1962, Stanley William Hayter published his second major text on the graphic arts that he intended for “the intelligent layman” who might collect or have an interest in the contemporary printmaking. “About Prints” was reviewed extensively by art critics, historians and other printmakers and generally acclaimed as “a standard work both for the potential collector and anyone interested in modern art.” Hayter was the founder of Atelier 17 and by the early 1960s considered one of the most influential printmakers of the 20th century, in large part because of the environment he created in his Parisian and New York print studios. Working with some of the most important artists of the day, Hayter championed experimentation and the development of new printing techniques, while understanding that any form of printmaking is merely a tool for the expression of an artistic idea.

“About Prints” explores Hayter’s ideas about contemporary printmaking and the artists who created these works. Using Hayter’s own checklist of important prints, the exhibition looks at why these images are innovative or essential to understanding how the graphic arts were being transformed throughout the 20th century. Prints by recognizable artists such as Picasso, Marc Chagall and Henry Moore are examined, along with other important visionaries such as Andre Masson, Max Ernst and Joan Miro. Technical innovators like Karl Schrag, Arthur Deshaies and Krishna Reddy are also represented in the exhibition along with Helen Phillips, Mauricio Lasansky and S. W. Hayter.  In addition to work included from the Syracuse University Art Collection’s vast works on paper holdings, there will be numerous works on loan to the exhibition from museums and private collections, including Yale University Art Gallery, Chazen Museum of Art, Brooklyn Museum, Minneapolis Institute of Art, Blanton Museum of Art, Frances Lehman Loeb Art Center, University of Michigan Museum of Art and Smith College Museum of Art.