‘A Magnificent Obsession’ through Nov. 10 at Palitz Gallery 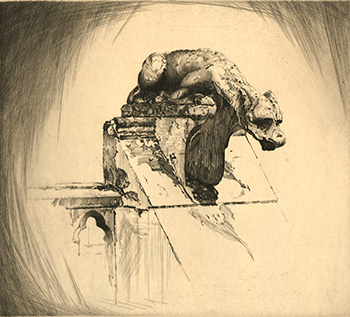 “Through Wind and Weather” by John Taylor Arms

“A Magnificent Obsession: Selections from the Hamilton Armstrong Collection of Prints,” now on display at Palitz Gallery, showcases work from artists born in the 19th century—a time when the reproductive qualities of printmaking had trumped the more intimate and handmade qualities that attracted Rembrandt and his contemporaries. Charles Méryon, John Taylor Arms, Samuel Chamberlain, Frederick Griggs and Henry Rushbury, each represented in “Magnificent Obsession,” broke from that tendency and focused again on hand-printed images.

“A Magnificent Obsession: Selections from the Hamilton Armstrong Collection of Prints” contains 25 hand-printed images made from etched copper plates.  The exhibition runs through Nov. 10. The gallery is open Monday to Friday, 10 a.m.-6 p.m. and Saturdays from 11 a.m. to 4 p.m., and is free and open to the public. The exhibition is closed for University holidays. Palitz Gallery is located at 11 East 61st St. Contact 212-826-0320, email lubin@syr.edu or visit our website for more information.

“In the early 19th century, few artists used printmaking as an original art form,” says Domenic Iacono, exhibition curator and director of the SUArt Galleries. “Not until the emergence of Goya, Blake, Méryon and others, did an etching revival take place and other artists began to actively investigate the unique qualities of the hand-printed image. We are fortunate that Hamilton Armstrong also appreciated these distinctive characteristics and amassed an interesting collection that he bequeathed to us after his passing in 2011.”

Méryon (1821-1868) had produced a series of etchings that depicted a changing Parisian landscape and, in turn, captured the imagination of a number of English and American printmakers who appreciated his renderings of urban scenes. Even Whistler was compared to Méryon when the American expatriate finished his ‘Thames Set’’ of London urban scenes in 1861. “Hamilton Armstrong delighted in the extraordinary scenes that Méryon created, and over the years acquired other architectural etchings by John Taylor Arms, Samuel Chamberlain, Frederick Griggs and Henry Rushbury,” says Iacono.

An American architectural etcher, John Taylor Arms (1887-1953) made prints throughout the first half of the 20th century and was often moved by Méryon’s prints. In fact, Arms made his own etching of the gargoyle Le Stryge, made famous by Méryon in his 1853 etching of the same subject, but the American artist called it “The Thinker (Le Penseur).” Arms called Méryon’s work “sensitive, imaginative and deeply spiritual expressions of architectural form and meaning.” 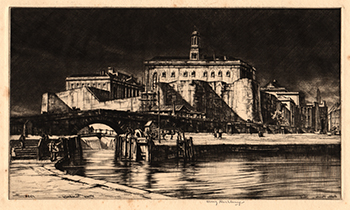 Samuel Chamberlain’s (1895-1975) views of European cities and landmarks were often published in Century and Architectural Record magazines. During his 50-year career, Chamberlain made trips to Europe and produced more than 200 prints, including lithographs, etchings and drypoints that often depicted the changing landscapes of the old-world cities.

The artists Henry Rushbury (1889-1968) and Frederick Landseer Griggs (1876-1938) were part of a British etchers movement in which architectural subjects played an all-important role and for whom Méryon was also an inspiration. Each of these artists was witness to different types of change. Méryon saw the urban renewal of Napoleon III, while the others saw war and natural forces as major catalysts for change.

“We here at the SUArt Galleries are fortunate that Hamilton Armstrong saw beauty in their renderings of these scenes,” says Iacono. “I am very excited to display a portion of his collection to visitors who come into the Palitz Gallery because they will have an opportunity to examine the personal interpretations of these artists who attempt to capture fleeting moments in European architectural history.”