After more than two years serving as Co-Chair of the Central New York Regional Economic Development Council (REDC), Chancellor Kent Syverud today announced that he has concluded his service with the REDC. 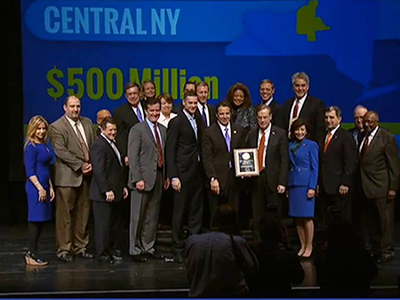 Chancellor Syverud (just right of center) poses with Gov. Cuomo and others in December 2015 after the announcement that Central New York was one of three regions that would receive $500 million in economic development funds.

“When I became Chancellor in 2014, I arrived as a native Upstate New Yorker, but a newcomer to Central New York,” says Chancellor Syverud. “I was honored then to be selected by Governor Cuomo as Co-Chair of the REDC.  My time as Co-Chair has been a wonderful opportunity to meet so many great people across the region and to work hard to win the $500 million Upstate Revitalization Initiative (URI) award for Central New York.”

“Now is the right time for someone new to step in and help lead the Council,” says Chancellor Syverud. “Earlier this summer, the University advanced its new Academic Strategic Plan and Campus Framework, along with the West Campus project, one of the largest construction and economic development projects in Central New York history. As we pursue that project and other new capital investments that will be made in our campus facilities footprint during the next decade, it is the right time for me to conclude my service on the REDC.”

During the Chancellor’s time as Co-Chair, the Central New York region was competitively awarded more than $580 million in economic development resources by New York State. This includes Central New York being selected in 2015 as one of three regions across New York to receive an historic $500 million as part of the Governor’s Upstate Revitalization Initiative.

“The commitment that Governor Cuomo has made to our region and all of Upstate New York is unlike that of any Governor before,” says Chancellor Syverud. “When the Governor took office in 2010, it was after decades of inaction in addressing the real economic issues the region faced. His vision has changed that dynamic and created new economic growth and opportunity in Central New York and beyond. I am proud to have played a small part in that success.”

“I want to thank all the members of the Central New York REDC for their dedication and hard work in supporting our region,” Chancellor Syverud said. “I especially want thank Rob Simpson for being a great partner and friend. I look forward to continue working with him and our community to help the whole world see Syracuse and Central New York as the best place anyone could want to be.”