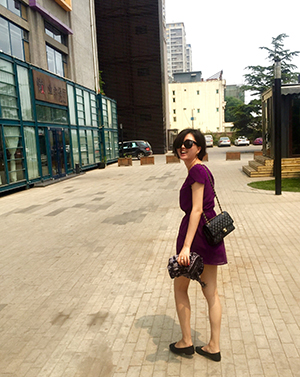 The campaign, which launched in May, was featured in AdvertisingAge and was chosen as an Editor’s Pick by Creativity Online.

Zhou is an account manager at the Shanghai office of global ad firm McCann Erickson where, in addition to Coke, she works on accounts for Subway, Princess Cruises and other major brands. Before McCann, she worked for another big firm in Shanghai, Leo Burnett. “Account management is a great job,” she says.

How have you and your team found success with the Coke Olympics campaign?

Good understanding of the brand is always a must, a good relationship with the client is a plus [and] most important is good management. Last but not least: a good team with people who trust each other. Only a team of people who would give 120 percent and always go the extra mile, and who have the same vision and great passion, can deliver good work.

What have been the most challenging aspects of the project? The most rewarding?

Most challenging: Time management and production. We had seven celebrity athletes who all had very tight schedules and requirements, so we had to shoot everything altogether in one week [before the athletes were] sent to Olympic training camp. We had three different production houses managing four TV commercials and one production house for the print shoot. Allocating time and ensuring we finished everything within that limited time frame almost killed the whole team. In addition, we shot all commercials last November in Beijing, when it was freezing, very polluted and very jammed—but we had to create a hot summer feeling with a clear blue sky because the ads were released in May and June.

Most rewarding: how I got involved in the strategy and how much I have learned from the process. Our team lead and our planning director went to Paris for a global pitch, and that left me and a junior planner to prepare for the strategy direction presentation. In the end, we came up with three directions in three days, and all got approved. This push and pressure actually gave me the kind of ownership I have never had before, and it is a huge confidence boost as well.

Tell me about your career path since graduating from Newhouse.

I went back to China and got an offer from Leo Burnett in Shanghai. My first job was an account executive; the main accounts I worked on were Coca-Cola and Grey Goose Vodka. I joined McCann in 2012 as an account manager on their new business team. Basically, our team worked on new business pitches, reaching out to potential clients. Coca-Cola moved from Leo Burnett to McCann in 2014 and I rejoined the Coke account team.

What led you to major in advertising?

I’m always very interested in things related to creativity and creation. To me, communication and marketing are very general terms, whereas advertising is very focused, yet profound. From strategy to idea creation to production and execution, every aspect is so fun to get involved with and there is so much to learn.

Was it a challenge to apply your American education to the Chinese advertising industry?

Not a challenge at all. In fact, I found the curriculum very useful and practical, especially in terms of building a solid foundation and capability. It prepared me to start a career right after graduation. I remember the first class I took was COM 101, which had a fill-in-the-blank pop quiz each week on New York Times articles. I had such a hard time memorizing all the names, dates and headlines in the beginning, but I became so much better at summarizing key points and reading later on, which I think is a very critical skill for any job in the communications industry in any country.

What advice do you have for students or alumni just starting out in the field?

First: Account management is a great job. Maybe most advertising students come to Newhouse with the hopes of becoming a great creative. I did, too. But please do not underestimate the power of account management. Good account managers can contribute so much to the entire campaign. They write a great strategy deck; they help creatives look for better reference music and film directors; they come up with 100 solutions to a production problem. All of these will take you to endless career opportunities in many industries.

Second: The accumulated experience takes you to the next level. No one wants to be an account executive. They do all the trivial things: set up meetings, order food, print out presentations, check artwork. I used to struggle a lot, too. But without the frustrations and all the little things I have done, I wouldn’t have learned how to appreciate good briefs, or see artwork mistakes at once, or recall a good example of a competitor’s ad, or judge an idea. The little things matter.