When the 2016 Summer Olympic Games kick off Friday in Rio de Janeiro, 23 students from the Newhouse School will be part of the team that brings coverage of the event to the world community. They are among 258 student interns from 100 different colleges and universities who will work alongside national and international communications professionals covering one of the world’s biggest sporting events.

The students will work as paid interns for NBC, and will be involved in many different aspects of the network’s Olympics operation. They will serve as production associates, shot selectors, loggers, ad inserters, runners and hospitality guides, among other roles. 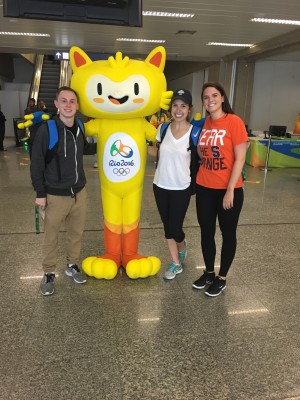 Students (from left) Christopher Henderson, Madeline Oleszkiewicz and Julie McCullough with Vinicius, the mascot of the 2016 Summer Olympics, at the Rio de Janeiro International Airport

Television, radio and film student Julie McCullough arrived in Rio July 24, and is already working with NBC staff there. “My bosses are some of the most accomplished people in the sports broadcasting world, and it’s a privilege to come in to work every day and watch them do what they do,” she says. She is most looking forward to watching the opening ceremonies on Friday.

Sharon Hollenback, professor of television, radio and film and communications at the Newhouse School, has been working with NBC to place interns at the Olympics since the games in Athens in 2004. “I’m continuously impressed with how NBC involves these interns,” she says. “They are a respected part of the NBC’s Olympic team, even as technology and delivery systems evolve. [NBC is] eager for students to experience the complexity of live sports coverage—before and during the 17-day global event.

“Students work alongside NBC staff and hundreds of freelancers in this internship that can’t be duplicated. Watching the Olympics for all of us is fascinating—often addictive—but being able to cover them for NBC?  Stupendous.”

Hollenback says she always receives positive feedback from NBC about Newhouse student interns’ knowledge, work ethic and professionalism. “They do us proud,” she says.

Michael Carter, a graduate student in broadcast and digital journalism, will work as a production assistant in Stamford. “I am most looking forward to interacting with on-air personnel and gaining an increased knowledge of how network television works during live event coverage,” he says. Carter says he also hopes to “leave a positive impression” on the professionals he works with. “As we’re often reminded at Newhouse: this is a small business, so professional connections are key to success.”

Carter previously interned as an NBC Page in New York, where he worked in the office of former NBC Sports chairman Dick Ebersol. He later held a marketing job for iHeartRadio, but decided to transition into broadcasting, returning to his home state of New Hampshire to take an on-air producing job. At Newhouse, he has covered the presidential race as part of the “Political Reporting” course and worked on Newhouse’s new morning show, “Mornings on the Hill.” “I feel like this opportunity to work for NBC Sports during the Olympics will give me more perspective on what working in on-air sports broadcasting is like so that I can compare and contrast it to my time in news,” he says.

In addition, three other Syracuse University students— Christopher Henderson and Jeffrey Maizes from the Falk College of Sport and Human Dynamics and Juwan Thompson from the Whitman School of Management—will also work as NBC interns during the Olympics.