What Hillary Clinton Needs to Accomplish at the DNC (Q&A) 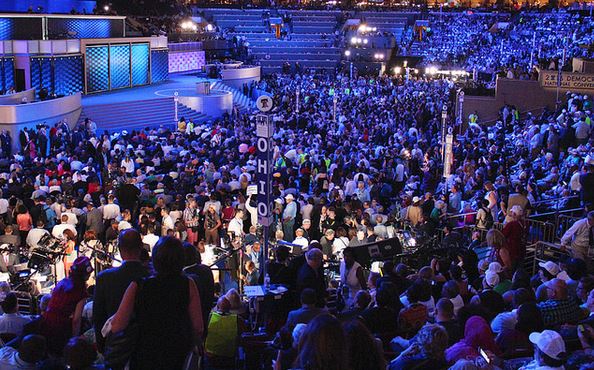 Delegates gather at the Democratic National Convention in Philadelphia. Photo by Chris Frommann/DNCC on Flickr

Hillary Clinton has a long road ahead. The Democratic presidential nominee (as of today’s nominating roll call vote at the Democratic National Convention) is running even with Republican candidate Donald Trump in some polls, and some supporters of former rival Sen. Bernie Sanders are not ready to unite with Clinton, causing a troubling stir at the convention.

Christopher Faricy, assistant professor of political science in the Maxwell School of Citizenship and Public Affairs, provides some insights as to what Clinton might need to do during this critical time to win support—both inside and outside her party.

Faricy is the author of “Welfare for the Wealthy: Parties, Social Spending, and Inequality in the United States” (2015, Cambridge University Press) and focuses his research on public policy, political economy, political institutions and public opinion.

Q: What does Clinton have to do at the DNC to win over Bernie Sanders’ supporters (especially in the recent wake of hacked emails seeming to show the Democratic National Committee’s preference for Clinton)?

A: There are two types of Sanders supporters: liberal Democrats and new voters. The vast majority of liberal Democrats have already come over to Clinton, in part because they are anti-Trump. The new voters that have been brought in by Bernie will be a harder sell. Bernie Sanders, and to an extent Elizabeth Warren, used their speeches on Monday night to convince supporters that showing up to vote in November is an important step in pushing forward the progressive movement. The DNC email leak makes this a harder sell, especially since many of these voters have the option of voting for the Green Party candidate, Jill Stein.

Q: What does Clinton have to say at the convention to get out ahead of Donald Trump, now that polls show they may be even?

A: Secretary Clinton has two jobs at the convention. One, Clinton is the most famous person in America that people do not really know. She has to tell her personal story so that she can better connect with white working-class voters and build more trust among the electorate. Second, she has to lay out a simple case against Donald Trump, explaining why he is not qualified for the office of the presidency.

Q: How might her vice president selection of Tim Kaine help her?

A: Tim Kaine comes across as authentic and likeable—two attributes not often used to describe Clinton. Most importantly, he is a popular senator from a swing state and if this is a close election, then Virginia might determine the winner in November. Finally, Kaine’s first big speech after being named was delivered partly in Spanish as a nod to Latino voters and focused on civil rights issues as a signal to voters of color in the party.  These are crucial segments of the Obama coalition that Clinton needs to turn out on Election Day.