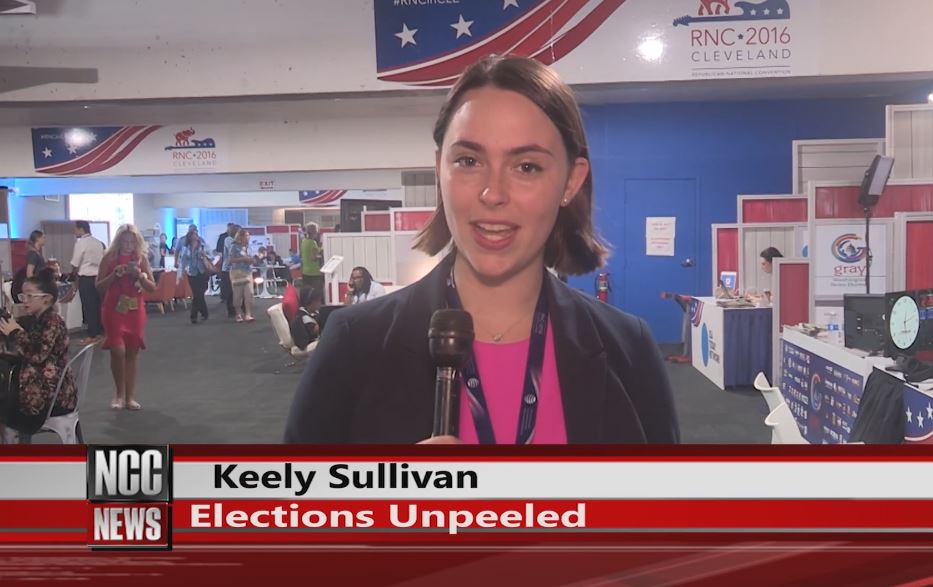 Keely Sullivan reports from the Republican National Convention in Cleveland as part of the Newhouse School project Elections Unpeeled.

The two will also be heading to the Democratic National Convention in Philadelphia starting July 25. During the Republican convention, the stories were posted on the Elections Unpeeled social media channels and website (http://electionsunpeeled.syr.edu), a project of the Broadcast and Digital Journalism Department at the Newhouse School. Their work was also done in partnership with Skype in Media.

(Update July 28, 2016: See bottom of story for coverage and social media from Elections Unpeeled at the Democratic National Convention in Philadelphia.) 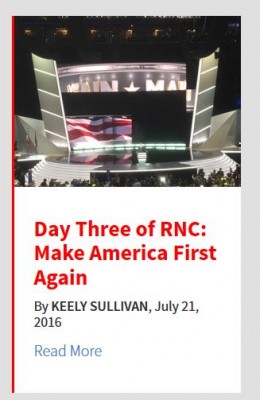 The coverage included a live Facebook post during former presidential candidate Sen. Ted Cruz’s speech (see below); wrap-ups on each of the day’s events; a story on the first Hispanic in the Kentucky legislature, who was speaking at the convention; a look at the media operations at the convention; an interview with former CBS News anchor Dan Rather; and a discussion with Ayla Brown about the millennial presence and how she campaigned for her father, former Massachusetts Senator Scott Brown.

“Being at the RNC is what I studied at Newhouse for. I discovered after my first internship in Washington, D.C., that field producing the politics beat was where I wanted my journalism career to take me,” Sullivan says.

“However, I never imagined I’d be able to do what I’ve dreamed of doing only two months out of college,” she says. “I love that I have the capability to tackle different angles in and out of the arena and that I’m encouraged to do so. I cannot wait to jump back in again in Philadelphia.”

We talked with @AylaBrown about millenials in the Republican Party. She’ll be singing the National Anthem tonight! https://t.co/y3GIr6XDrz — Elections Unpeeled (@ElecUnpeeled) July 21, 2016

Skype in Media, and its technology geared toward a new generation of broadcasters, is helping students create innovative content, powered by Skype TX—broadcast hardware with Skype integration.

Keren Henderson, assistant professor of broadcast and digital journalism at the Newhouse School, oversees the project.

The reporters maintain editorial control, while Skype and Microsoft Office facilitate the content workflow, ensuring technical capabilities and connectivity. The partnership will continue through the election cycle.

Highlights from the DNC:

Check out the official Elections Unpeeled preview of night 2 of the #DNChttps://t.co/f7NAFaqB9r