Dean of Libraries David Seaman has announced the creation of a state-of-the-art addition to the Syracuse University Libraries Facility, to provide 15,000 square feet of climate-controlled space in which to preserve the University’s rare and archival research and teaching collections. This much-needed expansion is funded in part by a gift from Bill Brodsky ’65, G’68 and Joan Brodsky ’67, G’68, alumni and generous supporters of the University. The design phase of the project will begin immediately, with construction expected to be completed in 2017. 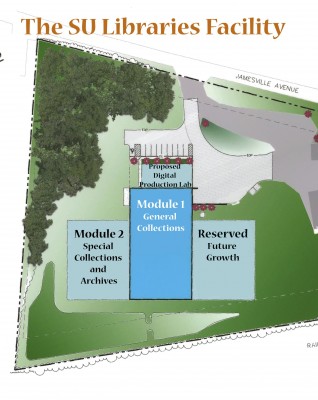 An artist’s rendering of the location of the library facility

The first module of the facility opened in 2012 and can hold 1.2 million books and journals. Circulating materials housed here are delivered speedily to campus upon request, or digitized and sent via email. The impact of the facility to date has been considerable, freeing up space on campus for new library acquisitions and allowing for dramatic renovations to the lower floors of Bird Library, now open 24 hours a day during the week all semester and the busiest student space on campus. It is expected that the upcoming expansion to the facility will be equally impactful on research and teaching.

The planned second module will expand what can be stored at the facility to include materials from Special Collections, University Archives and the Belfer Audio Archive. The facility will include cool and cold storage vaults that will provide optimal environmental conditions to ensure the long-term viability of the unique paper, film, audio and photographic materials held by the University. The storage facility will significantly increase the libraries’ ability to provide users with both original materials and digital copies for teaching and research. The University’s institutional history, held in the University Archives, will also be easier to access thanks to this capital investment in the libraries.

“These expanded and enhanced spaces are part of a broader plan for the curation and digitization of Syracuse University’s pre-eminent research collections, to meet the needs of faculty and students into the future,” says Seaman. “The new module will enable future generations of scholars and students to discover and use the libraries’ landmark photography and media collections, such as the Margaret Bourke-White and Clara Sipprell collections, the University film archives and many others.”

“Bill and I are pleased to be able to provide this gift to Syracuse University,” says Joan Brodsky. “This state-of-the-art facility is a critical component of the libraries’ infrastructure for preserving and providing access to its very fragile treasures.” Fundraising continues for this and other library infrastructures and spaces.

The Brodskys have a long-standing relationship with the University, from which they each hold two degrees. Their three sons are also University graduates, as is Bill’s brother and both of Joan’s brothers. Bill is a Life Trustee of the University and served on the Law School Board of Advisors from 1995-2003. He is chairman of the Chicago Board Options Exchange, after beginning his career as an attorney in the securities industry. Joan is a member of the Syracuse University Libraries Advisory Board and a former member of the iSchool Advisory Board. She also serves on the boards of the Newberry Library in Chicago, the Foundation Board of the Lincoln Library in Springfield, Ill., and the Library of the Jewish Theological Seminary in New York.