After nearly a decade serving the University and the Central New York region, Marilyn Higgins, vice president of community engagement and economic development, has announced her plan to retire from Syracuse University this summer. Following her retirement, Higgins will serve as a consultant to the Near Westside Initiative (NWSI) and will collaborate with other communities and institutions of higher education interested in developing projects similar to those undertaken in Syracuse. 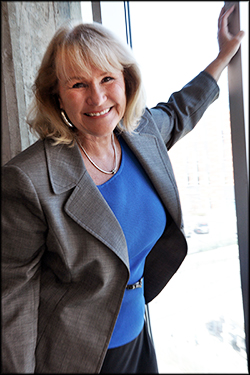 Earlier this year, Higgins informed the University of her decision to retire and developed a transition plan for the Office of Community Engagement and Economic Development.

“With the Connective Corridor public art programs finalized and the Near Westside Initiative so close to self-sufficiency, this feels like the right time to turn the page on this chapter of my career,” she says.

“Through Marilyn’s efforts, Syracuse University became a national leader in community engagement and urban revitalization in post-industrial cities,” says Chancellor Kent Syverud.  “Her ability to raise funds, coalesce diverse people and organizations around a goal and create connections between faculty, students and community members has had a significant impact on Syracuse.”

To ensure that the achievements and accomplishments made under Higgins’ leadership are transitioned in a thoughtful way, the University will provide support to the NWSI to enable Higgins to serve the NWSI Board in a consulting role through October 2017.

“Marilyn’s work has provided academic and experiential opportunities for more than 2,500 students to learn and grow while strengthening the community,” says Vice Chancellor and Provost Michele G. Wheatly. “Her work has left us with a good foundation as the University continues to partner with the community and support our combined efforts to enrich and enliven the community. I look forward to partnering with Marilyn in her new role as we collectively strive to take our community engagement efforts to an even higher level.”

“I want to thank Chancellor Syverud for his support. He has been gracious to me personally and patient for two years, allowing this office to substantially complete the major community projects we started. I look forward to witnessing the next decade of Syracuse University’s community engagement under the leadership of Chancellor Syverud and Provost Wheatly,” says Higgins.

The Connective Corridor is an urban streetscape and transportation route that connects the University to downtown Syracuse. The project brings together public art, business façade improvements and design along with the principles of smart growth and sustainability in the largest downtown public works project that the city has seen in more than 50 years.

Working closely with the City of Syracuse and Onondaga County, the Connective Corridor project attracted $47 million in new federal, state and local infrastructure funds to the city, including a $10 million highly competitive Tiger Grant in 2012. The project has received numerous national awards for design and engineering excellence.

The NWSI combines art, technology and innovation with neighborhood values and culture to revitalize Syracuse’s historic Near Westside neighborhood. Since 2008, $100 million in new investment, over 300 new jobs and 50 new homeowners have been attracted to this neighborhood of concentrated poverty.

As the founding chairman of the NWSI Board of Directors, Higgins and the late Kathy Goldfarb-Findling of the Gifford Foundation forged alliances with students, faculty, local residents and businesses, the Syracuse Center of Excellence in Energy Systems, Home Headquarters, the School of Architecture, WCNY and local foundations to create the initiative. Higgins hired Maarten Jacobs, a Syracuse University employee who has served as NWSI director since 2009. The NWSI has received numerous national awards, including the U.S. Green Building Council’s Global Leadership Award for Building Sustainable Communities in 2013.

“I am delighted that Syracuse University made it possible for me to both retire from SU this summer, and to work as a consultant to the Near Westside Initiative until October 2017,” says Higgins. “This arrangement will allow the Connective Corridor to remain on track and the Near Westside Initiative to achieve self-sufficiency. It has been an honor to work with the Syracuse University family, and so many remarkable people from this community.