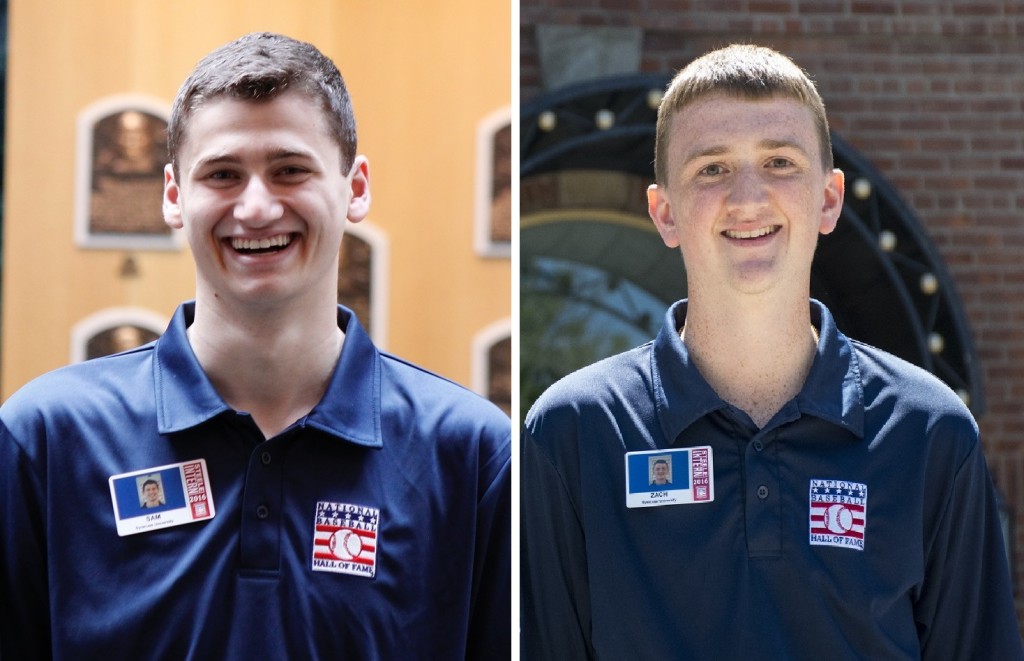 In the storied exhibition spaces of the National Baseball Hall of Fame and Museum in Cooperstown, two Syracuse University students are helping share the history of America’s beloved summer sport.

Zachary J. McDonald ’17 and Sam Sinykin ’18 were selected for the Steele Internship Program for Youth Leadership Development at the Hall of Fame—two of only 18 students selected from over 500 students across the country who applied.

McDonald sent in his application after hearing about the 10-week internship from a friend, Hannah Visnosky ’16, who interned there last year. When he got the call from the Hall of Fame, he was excited to hear the news that he was headed to Cooperstown.

“This internship program is extremely competitive, so although I was confident in myself I knew the chances of getting the position were slim; so getting that phone call that I received the position was incredible,” says McDonald, a sport management major and marketing minor in Falk College and the Whitman School, respectively.

Sinykin, who is from Wisconsin, had heard about the National Baseball Hall of Fame but had never been there until a visit with the honors class “Baseball and American Culture,” taught by Rick Burton, the David B. Falk Endowed Professor of Sport Management in Falk College.

He decided to apply after hearing about the internship from staff members. 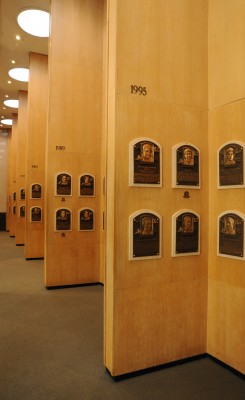 “I always heard how much of an amazing and historic place it was,” says Sinykin, a communication and rhetorical studies major in the College of Visual and Performing Arts with minors in marketing and sport management. “When I got the call from the senior staff of the internship program, I was ecstatic.”

McDonald works in the membership and development department. A big part of his job is customer service, McDonald says. He works at the ticket booth selling tickets and memberships to visitors, and he assists visitors at the information desk and works in the administration offices, answering phones and inputting data.

“I am involved in all events that the Hall of Fame offers, but specifically I will be heavily involved with Hall of Fame weekend, which is July 22-25,” McDonald says.

Sinykin has also been assisting staff with planning for the big weekend, which is expected to draw 45,000 people. The events include the induction ceremony and a parade of baseball stars.

“It’s been pretty fun helping with the planning. I’ll just be excited to be in the atmosphere of the Induction Ceremony,” Sinykin says.

Sinykin works in the programming department, helping with the special events, including being in charge of the author series and assisting baseball writers who conduct autograph signings, and conducts presentations for visitors in the Plaque Gallery, which shows those inducted into the Hall of Fame.

Interns are also given the opportunity to research and present to the guests specific artifacts that are in the Hall of Fame collection, but not currently on display.

Sinykin highlighted a warm-up jacket worn by Los Angeles Dodgers manager Tommy Lasorda during the year the team won the World Series, and a bat used by all-star Sean Casey, who played for the Cincinnati Reds.

“It was a cool accomplishment to do the research and show the visitors,” Sinykin says.

After graduation, Sinykin hopes to work in the sport industry in the area of intellectual properties, taking part in events and managing sponsorships to allow fans to have different experiences with their favorite sport.

“That would be a dream job and this National Hall of Fame experience—working on programs and event planning and interacting with visitors—will hopefully be a first step to that dream,” says Sinykin, who is grateful for the connections with the staff who quickly got to know the interns and the connections among the interns.

McDonald is trying to soak up as much knowledge and experience as he can during his time in Cooperstown. “The Hall of Fame employs tons of extremely intelligent and successful people and this is a tremendous growth opportunity for me,” McDonald says. “My hope is that I can create and develop lifelong relationships that help advance my career.”

The coolest part of his time there is just being able to be part of the Hall of Fame every day.

“There’s so much history in the building and being a baseball fan I’m like a little kid in a candy store,” McDonald says. “It’s a once in a lifetime opportunity.”