Iconic Lincoln Statue on Campus Gets an Upgrade 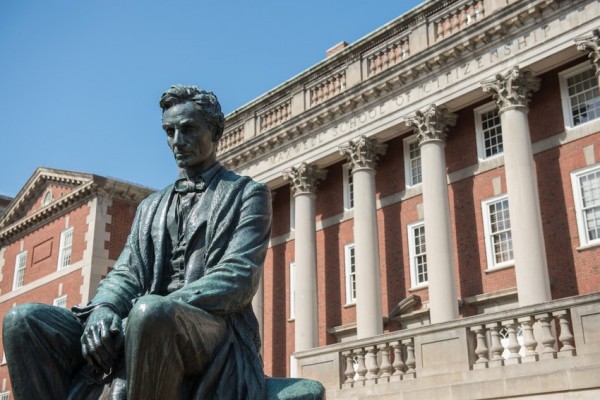 The Lincoln statue outside Maxwell Hall has been taken off its base as it awaits a new granite stone base. (Photo by Steve Sartori)

Abraham Lincoln has watched over the Maxwell School courtyard for nearly half a century. To ensure permanence for this iconic bronze statue’s resting place, the base is getting an upgrade with long-lasting natural stone.

The statue—the only recast of artist James Earle Fraser’s “Seated Lincoln”—will be placed atop a new granite base, to replace the current deteriorating concrete base.

On Thursday, passersby may have seen workers, with JPW Riggers of Syracuse, carefully lift the 2,700-pound Lincoln from its base using a crane and placing the statue on a wooden framework, where it will rest as the site is prepared and the new stone put in place. 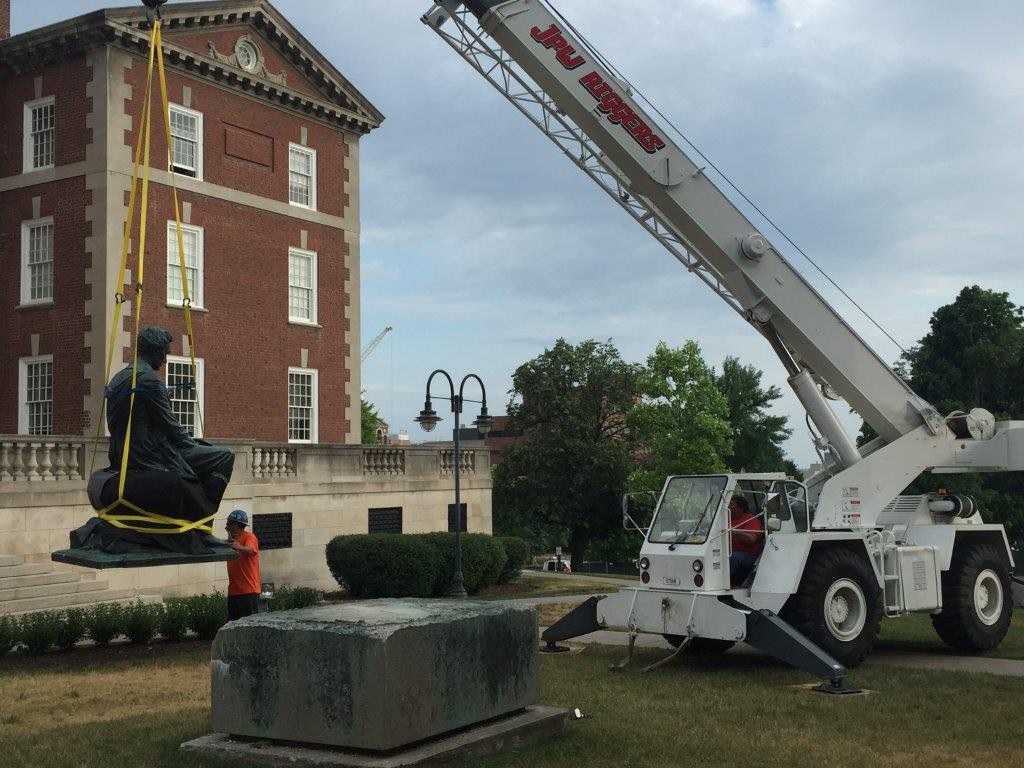 Workers carefully take the bronze Lincoln statue off its base Thursday.

“We expect to have the Lincoln sculpture back in position on a new granite base in two to three weeks,” says Rex Giardine, assistant director of capital projects with Campus Planning, Design and Construction (CPDC).

The nine-foot-tall statue will receive a new base of honed Barre Gray granite. The new eight-and-a-half ton granite base was fabricated in Barre, Vermont, and arrived in the Syracuse area in mid-June, Giardine says. 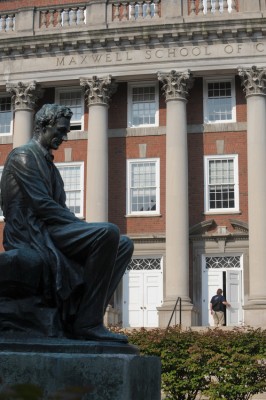 “When all preparatory work is completed, the new granite base will be delivered and set by crane, then the Lincoln sculpture placed atop it,” Giardine says. “Some minor site work and regrading will be done in coordination with the project.”

The work is part of the extensive summer construction and renovations taking place on campus, as part of the Campus Framework.

Among the most familiar and beloved artworks on campus, the piece was placed in its location on Dec. 13, 1968, according to an article in the Maxwell Perspective.

The recast bronze was a gift of the James Earle and Laura Gardin Fraser estate, which also gifted the University the Frasers’ papers, books, photos and more than 500 pieces of artwork. The original bronze Lincoln by Fraser is located in Jersey City, New Jersey.

“The ‘Seated Lincoln’ sculpture by James Earle Fraser was cast in 1968 when the much of the art from Fraser estate came to Syracuse. The site between Maxwell and the Tolley Building (then the Von Ranke Library) was chosen because of Lincoln’s stature as a statesman and his reputation as a self-taught authority on the law,” says Domenic Iacono, director of the SUArt Galleries and Collection.

“Completed several years after Daniel Chester French’s design for the Lincoln Memorial, Fraser chose to portray a young, beardless man as yet unaware of the coming conflict between the states, in a contemplative pose suggestive of his awareness that public service is a high calling,” Iacono says.

The acquisition of the statue and its placement were also part of a greater effort to increase the number of public artworks on campus.

Also on campus this summer, another statue, “Dancing Mother,” near Hinds Hall, will also be getting a new granite base, through the work of SUArt, CPDC and Physical Plant. Both the Lincoln bronze and “Dancing Mother” are part of the Syracuse University Art Collection. 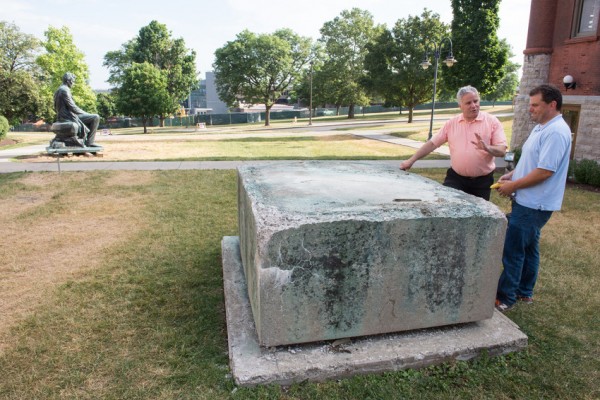 Rex Giardine, assistant director of capital projects with Campus Planning, Design and Construction, left, and Andrew Saluti, assistant director of the Syracuse University Art Galleries, discuss the installation of the Lincoln statue’s new base, which will be put in place in the next few weeks. The current concrete base, shown here, will be replaced with granite. (Photo by Steve Sartori)