With bipartisan, unanimous consent in the U.S. Senate on July 17, passage of the Emmett Till Unsolved Civil Rights Crimes Reauthorization Act of 2016 is one step closer to becoming law. The Cold Case Justice Initiative (CCJI) at the College of Law, along with partners like activist Alvin Sykes and organizations including the NAACP, Southern Poverty Law Center, Georgia Civil Rights & Cold Cases Project, Emmett Till Legacy Foundation, Mamie Till Mobley Foundation and the Northeastern University Civil Rights & Restorative Justice Project played an instrumental role advocating for stronger provisions and passage of the bill. 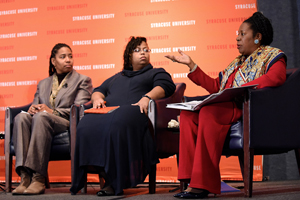 The Cold Case Justice Initiative at the College of Law examined the current state of the Emmett Till Unsolved Civil Rights Crimes Act during a panel at the National Press Club on Dec. 9, 2014.

“The United States Congress took a substantial step forward, providing the opportunity for justice for the victims of Civil Rights Era racial murders and disappearances,” says Paula Johnson, professor of law and co-director of the CCJI. “Since beginning our work in 2008, we have consistently demanded thorough investigations and a full accounting of those who were killed or disappeared during the Civil Rights Era and beyond. This reauthorization will do just that.”

“We appreciate that the Senate came together to pass the Reauthorization Act without rancor and division,” says CCJI co-director and law professor Janis McDonald. “It is an affirmation that this effort is the right thing to do for our nation, so we want to thank the senators on both sides of the aisle who stood behind this push for reauthorization.”

The effort in the Senate was led by Sen. Richard Burr (R-NC), who has worked alongside his counterpart in the House of Representatives, Congressman John Lewis (D-GA). In addition to Burr, fellow senators Patrick Leahy, Claire McCaskill and Roy Blunt were instrumental in the Senate process, while Congressmen John Conyers and James Sensenbrenner have also worked on the House side.

The original Emmett Till Unsolved Civil Rights Crime Act of 2007 was scheduled to expire in 2017. “Much work remains to be done to investigate the killings and disappearances of victims of racially motivated violence during the Civil Rights Era,” says Johnson. “The Reauthorization Act not only extends the sunset provision of the original legislation, but enhances several aspects of the law so that the prospect for justice can be realized.”

The Reauthorization Act calls for:

• full accounting of all victims of racial murders and disappearances from the Civil Rights Era and beyond, so that all victims of such violence will be identified and cases investigated and adjudicated where possible;

• thorough review of open and previously closed cases to ensure that the Department of Justice, FBI, and state and local law enforcement undertake complete assessments prior to determining further legal pursuit or closure of cases;

• Department of Justice collaboration and communication with law enforcement and other entities who work on these issues to bring collective expertise and insight on determinations about cases; and

• greater access and release of information under the Freedom of Information Act when cases have been closed so that family members, advocates, academics and investigative journalists can obtain and analyze the full information about cases.

“As we have seen in recent weeks, racial justice remains an imperative for U.S. society,” says McDonald. “Too often, in the past and the present, racially motivated crimes resulting in death or grave injury have been committed with impunity. The Emmett Till Unsolved Civil Rights Crimes Reauthorization Act of 2016 recognizes the importance of rectifying these wrongs and bringing perpetrators of these crimes to justice.”

“The Reauthorization Act offers the promise of justice for the families and communities who have suffered losses and lack of faith in the justice system,” says Johnson. “Now that the Senate has acted, the Cold Case Justice Initiative urges the House of Representatives to do likewise and pass the act. The families of the victims, the communities that have been most directly affected and the public at large demand and depend on their government and law enforcement officials to fulfill the promise that justice delayed is not justice denied. It is never too late for justice.”