Ann Gualtieri ’75 started as an art major before shifting gears to study philosophy. Then, after collecting bachelor’s, master’s and doctoral degrees in philosophy, she shifted to the business world, working in global leadership positions for major corporations. 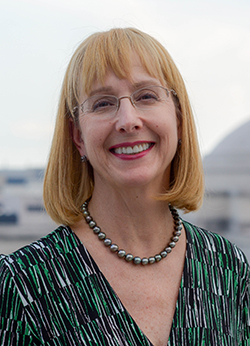 She spent her first two years at Syracuse University in the art school, majoring in painting. But as she contemplated a career as an artist, she realized, “I’m only 19 years old and I don’t have anything to say,” she recalls. “I felt that as an artist I had the technique, but I felt very keenly that I had not begun to grapple with the deep and important themes of life.”

To fill that void, she changed her major to Arts & Science’s Philosophy Department. “It seemed like if I wanted to study the important themes of life and the history of the world, that seemed like the place to do it,” she says.

The change “was absolutely right,” she says. “I fell in love with it. There was no empirical basis for my idea to study philosophy, but it was exactly correct.” She spent her senior year studying at the University of London’s Bedford College, then decided to pursue a doctorate in philosophy.

“A lot of people think of philosophy as this fluffy thing, but it’s not,” she says. “It’s highly intellectual. I loved the rigor of it. I liked how it strengthened my mind. It made me smarter.”

Although Gualtieri loved the subject matter and taught while a graduate student, she didn’t want an academic career. She considered a career in law, earned a degree in gerontology and started a business. While completing her Ph.D. at the University of Michigan, she earned an M.B.A. as well. “The M.B.A. opened up a much wider world for me,” she says.

The analytical skills she learned studying philosophy also transferred well to her career. “Philosophy is extremely rigorous and precise, so it was really easy for me to do statistics and math and finance,” she says.

She first worked as a consultant with the accounting firm KPMG Peat Marwick—a job she calls “a post-doc in business.” Next she joined Abbott Laboratories, the healthcare manufacturer that helped create modern laboratory diagnostics and developed one of the first antiretroviral treatments for HIV.

She also worked in mergers and acquisitions and human resources for Searle, the pharma division of Monsanto. She was there when the company launched the blockbuster drug Celebrex. She retired in 2009 from DuPont, where she held senior leadership roles in investor relations, corporate strategy and human resources.

Gualtieri now shares the skills she developed at Syracuse and honed over a successful career as a board member for two nonprofit organizations. She’s treasurer for Cancer Care Connection, a Delaware-based organization that links people affected by cancer with resources. She also serves as vice chair of the board of trustees for the National Park Trust, which promotes park preservation and stewardship.

“Because of my experience, I end up on boards doing strategic plans and straightening out finances,” she says. “I am very aware that I have been very lucky in my life. Those of us who have resources and live a good life should give some of it back.”