The S.I. Newhouse School of Public Communications will present the fourth annual Marty Glickman Award for Leadership in Sports Media to alumnus Sean McDonough ’84 of ESPN at an invitation-only event July 25 at Time Warner Headquarters in New York City. 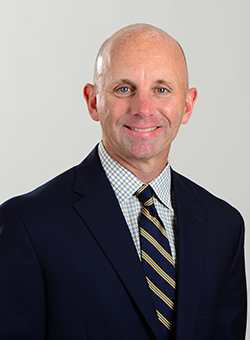 Other speakers at the event will include McDonough’s friends and colleagues Jason Benetti ’05, ESPN and White Sox play-by-play announcer; Bill Raftery, college basketball analyst with Fox Sports; and Dan Hoard ’85, radio voice of the Cincinnati Bengals and the University of Cincinnati.

McDonough, one of sports television’s most versatile broadcasters, will be the new play-by-play voice for ESPN’s “Monday Night Football” (MNF) when the 2016 NFL season kicks off this fall. He becomes the fifth person to occupy the position in the 46-year history of MNF, joining broadcasting stalwarts Keith Jackson, Frank Gifford, Al Michaels and Mike Tirico ’88, who called the past 10 seasons on ESPN. He is also a leading play-by-play commentator on the network’s college basketball coverage.

McDonough has also voiced ESPN’s Major League Baseball Monday Night Baseball telecasts; served as a host and hole announcer on ESPN’s coverage of the U.S. Open The Open Championship and other golf events; and he has provided play-by-play on the network for NHL, tennis, the College World Series and college lacrosse, soccer and hockey. From 2013-15, he also called NFL games for ESPN Radio.

McDonough was the television play-by-play announcer for the Boston Red Sox from 1988-2004, during which time he was honored four times with the New England Sports Emmy Award for Outstanding Play-by-Play.

McDonough spent 10 years at CBS Sports and was the lead college football play-by-play announcer from 1997-99. In 1992 and 1993, he and Tim McCarver formed the network’s lead Major League Baseball broadcast team, calling the All-Star Game, the National League Championship Series and the World Series. At CBS, McDonough also provided commentary for a diverse array of sporting broadcasts, including men’s and women’s college basketball, NFL, the Masters and PGA Championship, and U.S. Open Tennis. He worked 10 NCAA men’s basketball tournaments, and he contributed to CBS’ coverage of the Olympic Winter Games.

In 2014, McDonough was named to the Hall of Fame for WAER, Syracuse University’s noncommercial radio station, where he began his sports broadcasting career as a student.

McDonough is president of the Sean McDonough Charitable Foundation, which has given nearly $3 million to 129 children’s charities throughout Massachusetts.

The Glickman Award is named for sportscasting pioneer Marty Glickman, a 1939 alumnus of Syracuse University. Glickman’s legacy marks the beginning of the Newhouse School’s reputation for turning out more talented sports journalists than any other program in the country, leading Syracuse University to be hailed as an “incubator” of American sportscasters by Sports Illustrated.