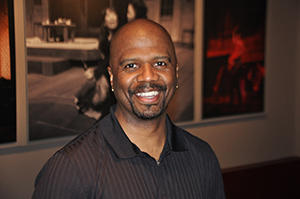 “I’m honored that Kyle Bass has accepted the position of associate artistic director,” says Hupp. “Kyle and I will work together to build on the theater’s rich artistic history while we chart a new course of artistic identity and exploration. Kyle has been instrumental in the transition process. His experience as a playwright and dramaturg, combined with his keen insight and knowledge of the field, and his commitment to community engagement, make him an exceptional artistic partner for me, and an ideal artistic collaborator for Syracuse Stage.”

An accomplished playwright, Bass worked closely with Ping Chong on two Syracuse Stage projects that became part of Chong’s “Undesirable Elements” series. “Tales From the Salt City” had its world premiere at Syracuse Stage in 2008. “Cry for Peace: Voices from the Congo,” which Bass co-wrote, premiered at Stage in 2012 and was subsequently produced at La MaMa Etc. in New York.  His one-man play “Carver at Tuskegee” was produced as part of Syracuse Stage’s “BackStory!” series.

“I’m honored to continue with Syracuse Stage as associate artistic director and excited to work with Bob Hupp. His commitment to developing and producing new plays and the emphasis he places on connecting the art of what we do to the heart of who we are both builds on Stage’s history and shines a bold and necessary light toward the future of this organization. I’m thrilled to play a key role in the next chapter of Stage’s history,” Bass says.

Bass’ stage plays include “Tender Rain, Bleecker Street, Fall/Out,” produced by the Kitchen Theatre, “The Heart of Fear,” published in the journal Stone Canoe; and “Northeast,” which appeared in the journal Callaloo. He is currently at work on a new play titled “Possessing Harriet,” which was commissioned by the Onondaga Historical Association and developed at the Kitchen Theatre, and a screenplay adaptation of the novel “Milk” by Darcey Steinke.

In addition to his work at Syracuse Stage, Bass is a faculty member in the M.F.A. Creative Writing Program at Goddard College and teaches playwriting in the Syracuse University Department of Drama, at Colgate University and at Hobart & William Smith Colleges.

As a writer, Bass is a two-time recipient of the New York Foundation for the Arts Fellowship (for fiction writing and for playwriting), a semi-finalist for the Princess Grace Playwriting Award and a Pushcart Prize nominee. Bass’s prose and other writings have appeared in the journals Folio and Stone Canoe, among others, and in the anthology “Alchemy of the Word: Writers Talk about Writing.” Bass is drama editor for Stone Canoe. He holds an M.F.A. in playwriting from Goddard College and is a member of the Dramatist Guild of America.