Citing his unique qualifications and his vast knowledge of and passion for Syracuse University Athletics, Chancellor Kent Syverud today announced he has selected John Wildhack ’80 to be the University’s next director of athletics. Wildhack, a veteran leader at ESPN, currently serves as the network’s executive vice president for programming and production, a role he’s held since January 2014. Wildhack reports directly to ESPN President John Skipper and is responsible for 50,000 hours of content annually. He’ll start his appointment in mid-August. 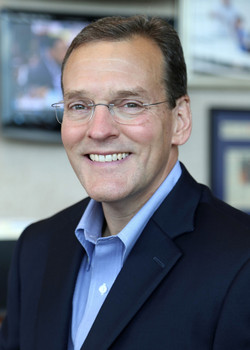 Wildhack, a native of Upstate New York and a 1980 alumnus of the S.I. Newhouse School of Public Communications, was selected following a national search. He was recommended to the Chancellor by the Director of Athletics Search Committee.

“John is an entrepreneurial, outside-the-box leader who brings an unparalleled set of skills and experiences to the director of athletics position,” says Chancellor Syverud. “As a leader at ESPN, he has demonstrated a keen ability to identify and implement strategies aimed at elevating the entire organization. That record of success, combined with his extensive history of building and inspiring teams, will allow him to immediately and positively impact the lives of our student-athletes. This is a new day in the life of the Department of Athletics. I look forward to watching John, in collaboration with our talented coaches and staff, bring his bold vision for the department to life.”

“To say this is a dream job would be a significant understatement,” says Wildhack. “Syracuse University played a profound role in my life’s trajectory and I’m confident I wouldn’t be where I am without the education and opportunities this institution afforded me. To help my alma mater, in particular Syracuse student-athletes, continue to excel and grow, especially in light of the enormous investments being made, and that have been made in its facilities, is a tremendous responsibility and one I don’t take lightly. I am honored to have been selected and I look forward to collaborating with the amazing coaches and staff as we work to develop the whole student-athlete—inside and outside the classroom.”

During his distinguished career at ESPN, Wildhack held a number of critical leadership roles and has been responsible for a number of firsts at the network. Those firsts include producing ESPN’s first live regular-season college football game in September 1984 and its first live NFL game in August 1987. See an infographic about him here.

“John doesn’t shy away from taking risks, and he’s always pushing his teams to be the first and the best,” says Dino Babers, head football coach. “I expect John to be a catalyst for much growth and success in the future. I’m eager to welcome someone of his caliber to the Syracuse Athletics team and I am certain we will accomplish great things—both on and off the field.”

“I am confident that John’s business acumen positions him to be an excellent athletics director,” says Bob Bowlsby, Big 12 Conference commissioner, “and know that he will be as successful in the AD chair as he has been in his executive role at ESPN. I wish him the very best of luck as he starts this new chapter in his career; and congratulate Syracuse University on the hire, and its student-athletes, coaches and staff, who will no doubt benefit greatly from John’s leadership.”

“John is a special kind of leader and Syracuse University is fortunate to have someone of his stature taking the helm of Syracuse Athletics,” says NBC Sports’ Michael Tirico ’88, Trustee and a longtime ESPN colleague. “I applaud Chancellor Syverud and the search committee for approaching this search with an open mind and for selecting someone who is so widely known for his exceptional record of success. As someone who has spent a lot of time around Power Five athletics directors, I couldn’t have picked a better director of athletics myself. I look forward to seeing the department, coaches, staff and our student-athletes thrive under John’s leadership.”

Previously, Wildhack served as executive vice president for production from 2012 to 2014, during which time he was responsible for all ESPN and ABC game, event and studio production work for domestic and international television and radio networks. Prior to that, he was ESPN’s executive vice president for programming and acquisitions from 2007 until 2012. During that time, he oversaw all rights negotiations and managing relationships with rights holders for all ESPN entities. These include ESPN, ESPN2, ESPN Classic, ESPNEWS, ESPN Deportes, ESPNU, ESPN International, ESPN Radio, ESPN.com, ESPN3, ESPN Mobile Properties, print and more. In 2009, he began leading strategic program planning for all the ESPN television networks, ESPN on ABC and ESPN’s digital platforms.

“John really stood out in the competitive pool of candidates we interviewed,” says Kimberly Keenan-Kirkpatrick, deputy athletics director and senior women’s administrator. “His experience negotiating high-profile contracts with some of the world’s largest athletics organizations, as well as his extensive background leading large, diverse groups of people are just two of the reasons he’s the right person for this job. He may not come from a traditional intercollegiate athletics environment, but there’s no doubt his professional experience and leadership prowess will allow him to be among the best leaders our department has ever had.”

Wildhack, who was born and raised in Buffalo, first joined ESPN as a production assistant in 1980. He served in a number of production positions prior to taking on a leadership role, including production assistant, associate producer, senior associate producer, producer, coordinating producer and director of event productions. Wildhack, an active Syracuse alumnus, sits on the Advisory Board for the David B. Falk College of Sport and Human Dynamics and was an honoree at the “Newhouse at 40” Gala. 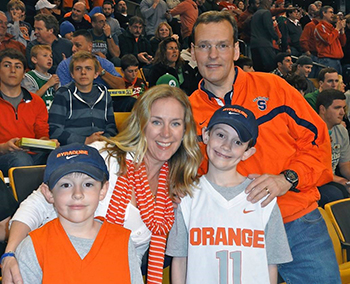 Wildhack with his family

Rick Burton, the David B. Falk Endowed Professor of Sport Management in Falk College and the University’s faculty athletic representative to the ACC and NCAA, says Wildhack appreciates what it takes to be a successful student-athlete at Syracuse University. “He recognizes that we must foster an environment where our student-athletes’ success isn’t just measured on the playing fields, but in the classroom as well. His commitment to their academics, to their stewardship of the University and to their activities in the community will allow him to build a championship program steeped in hard work, humility and respect.”

Wildhack will be formally introduced to the Syracuse University and Central New York communities at an event on campus next Tuesday, July 12. His arrival on campus will mark the conclusion of Daniel J. French’s tenure as acting director of athletics. French, senior vice president and the University’s General Counsel, assumed the acting duties on May 19 and will continue in this role until Wildhack assumes the role in mid-August.

“Dan is an integral member of University leadership and I am grateful to him for stepping up during a time of transition and leading Syracuse Athletics in the interim,” says Chancellor Syverud. “I am confident Dan and Senior Deputy Athletics Director Herman Frazier will help make John’s arrival on campus a smooth and successful one.”