When Teresa Gilman took a position in 1977 as curriculum coordinator in the University Senate Office, she figured she would work at Syracuse just until she paid off her student loans. Nearly four decades later, Gilman has long since paid off that debt. But with her departure next week as Senate recorder, she leaves her alma mater now deeply indebted to her for her service. 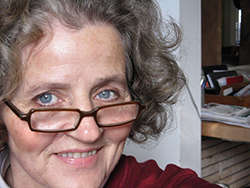 “It’s hard to imagine the Senate without Teresa Gilman,” says Crystal Bartolovich, associate professor of English in the College of Arts and Sciences and a member of the University Senate. “She carries so much institutional memory that going on without her is a huge loss.”

Thursday, June 30, will be Gilman’s last day as Senate recorder, a position to which she was appointed in 1990. In that capacity, she has been the logistical and procedural engine that has kept Senate business on track and moving forward under three successive University administrations. Among other things, she has recorded and distributed Senate meeting minutes; provided support to its agenda and budget committees; kept the Senate informed of committee work and administrative and Trustee actions; and helped make up committee membership from year to year.

“The Senate recorder basically manages the office that supports the work of the Senate and its committees,” says Gilman. “The Senate is an advisory body to the Chancellor and meets usually once a month to debate and come to consensus on important issues. It reviews all matters that relate to the academic programs at the University, monitors many things that peripherally affect those programs, approves all curricula, acts on the granting of degrees—including honorary degrees—and awards emeritus status to retiring faculty.”

It was a job Gilman, a 1974 Syracuse graduate, had to learn on the fly. Curriculum coordinator at the time, she was thrust into the role in January 1990 when the presiding University recorder went out on sick leave the day of a Senate meeting. “Over the next few months, I took on many of her responsibilities,” Gilman says, “figuring things out by reading her meticulous notes and digging into the extensive files.”

The recorder at the time, Helen Wigler, passed away several months later, and Gilman reached out to then-Vice Chancellor for Academic Affairs Gershon Vincow. “I told him that I had been doing the Senate recorder job for several months and that I thought I ought to be paid her salary, and that I needed to hire some help,” Gilman recalls. “He called up and told me to write up the job description and then apply for the job.” She was formally appointed to the position in June of that year.

Those who have worked closely with Gilman say she will be difficult to replace. “Teresa was and is amazing for her historic knowledge of the Senate—the by-laws, the way she could pluck a document, report or minutes out of the files and answer any questions, small or large, about precedent and past practices,” says Eileen Schell, associate professor of writing and rhetoric in the College of Arts and Sciences, a member of the Senate and a past chair of its Agenda Committee. “That kind of knowledge is impossible to replace. She simply had heard it all and seen it all on the Senate floor, and she has a great memory for details.”

She also has a gift for persuasion, which Schell says she experienced firsthand. She recalls the time several years ago she was serving as a member of the Senate Agenda Committee. “They needed a chair, and Teresa managed to cajole me into it by saying how easy it was to chair the committee,” Schell recalls. “She knew very well how difficult and political that role is, how it involves working closely with the committee and the Chancellor and vice chancellor/provost. But she reminded me that she would be there to help me every step of the way, and she did. She knew I could do the job and that I was up for it, but she knew I’d never do it unless she ‘persuaded’ me I could do it. And it worked.”

Schell and Bartolovich also praised Gilman’s commitment to shared governance as a defining quality of her service to faculty, staff and students. “Even harder to replace than her institutional memory is her enormous devotion to shared governance—the participation of all University constituencies in making the decisions that jointly affect us,” says Bartolovich. “At every point in my participation in Senate, from my first term as a senator to my election to the Agenda Committee, Teresa assisted me by providing crucial and timely information and advice. I will really miss her and hope that those of us who remain are able to honor her enormous contribution by effectively continuing the struggle for transparency and true shared governance that she served so well for so long.”

Associate Provost for Academic Programs Andria Costello Staniec says Gilman has been invaluable in organizing and guiding the Senate. “She has supported hundreds of faculty, staff and students as they fulfill their important roles as University senators,” says Costello Staniec. “There are countless SU community members, past and present, who benefited from her guidance and counsel.”

Beyond recording minutes and drafting Senate status reports for the Board of Trustees, Gilman pursues writing of a different sort. She is a published poet whose awards include, among others, a first prize in the National Pen Women’s Poetry Contest and a second-place prize in the Finishing Line Press chapbook contest. She currently is working on poems for another book and has been asked to serve as an editor for the Comstock Review poetry journal.

While Gilman looks forward to continuing her writing, poetry readings and workshops, she says she also will deeply miss the people she’s come to know during her time at the University. Needless to say, the feeling is mutual.

“I will miss her a great deal,” says Schell. “And I know she didn’t tell us she was leaving because she wouldn’t want to listen to us complain that we can’t do without her, which is true. We can’t. She’s irreplaceable.”