June 26 marked one year since the U.S. Supreme Court announced its landmark decision in Obergefell v. Hodges, which guaranteed the right to marry to LGBT couples throughout the United States. Aaron Hoy is a doctoral candidate in sociology in the Maxwell School whose research and teaching interests include gender and sexuality, marriage and families, and culture. He shared his thoughts on the importance of this decision, its effects and what’s next for the LGBT rights movement.

Q. Of the many basic rights that LGBT people have demanded—the right to employment and housing, the right to have children—equal rights in marriage is the one that seemed to grab the public’s imagination, causing a public outcry for and against when it was affirmed. Why do you think this is? 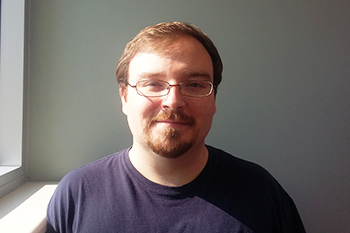 A. Following the 1993 Baehr vs. Lewin decision, in which the Hawaii Supreme Court ruled that gays and lesbians should have equal access to marriage, socially conservative organizations, which were highly organized and well funded, made opposing marriage equality a priority. Social conservatives felt that marriage needed to be defended because from their perspective, the nuclear family is the bedrock of our society. They worried that gays and lesbians would untether marriage and procreation and might even bring an end to marriage as an institution.

To a significant extent, marriage equality became an issue much to the surprise, and chagrin, of LGBT rights activists who, in the early 1990s, calculated that marriage equality would be too difficult to achieve and would drain the LGBT rights movement of valuable resources. LGBT rights activists eventually took up the issue for several reasons. One is simply that LGBT people needed to be defended against the attack from social conservatives. But a more important reason is that for better or worse, marriage is an institution through which a broad range of legal rights can be accessed. Some of these are parental rights, which were especially needed at the time because same-sex couples were increasingly having and raising children. Other rights help couples to care for and protect one another, which many gay male couples needed following the HIV/AIDS epidemic. Beyond rights, though, marriage is also an institution through which couples gain legitimacy for their relationships, both from family and friends and from the broader society. In short, LGBT rights activists understood that marriage is a crucial part of citizenship.

Q. Gaining marriage equality was a huge symbolic victory for the LGBT community, but how has the reality measured up? With anti-LGBT activists like Kentucky county clerk Kim Davis and a handful of bakeries and such refusing to service gay couples, have most LGBT couples been able to proceed smoothly into matrimony?

Families are also important here, and when same-sex couples marry, old conflicts with family members are sometimes reignited. Many same-sex couples face resistance from family members who oppose marriage equality or are intolerant of homosexuality. Just as often, though, family members are supportive, in part because marriage confers legitimacy in our society. Same-sex couples tend to report that upon marrying, they become more fully integrated into their families and that family members accept and value their relationships more than before. Sometimes this happens despite initial conflict, as marrying smooths over hostility or rejection by signaling that a couple is serious and committed to one another.

Overall, same-sex couples do face some obstacles to marrying, and most of them are obstacles that different-sex couples are unlikely to face. But the transition to marriage has been easier and less difficult than most anticipated.

Q. Some have theorized that hate crimes like the recent tragedy in Orlando may increase in the next few years in reaction to the relatively rapid success of the LGBT rights movement. What is your take on this?

A. Gathering accurate and reliable statistical information on hate crimes is challenging, in part because of whether and how a particular incident is defined as a hate crime and in part because of underreporting. Having said that, there is evidence to suggest that hate crimes against LGBT people are on the rise. At a minimum, the news media are more likely to cover hate crimes, and as a consequence, the public has become more aware of how prevalent, and brutal, they are. I think it is difficult to draw a direct line between any particular success on the part of the LGBT rights movement and hate crimes, but it does seem that the overall success of the LGBT rights movement has motivated some to commit acts of violence against LGBT people. We are living in a moment of rapid and dramatic social change, especially with respect to gender and sexuality, and this is offensive to some and difficult for others to accept. Many have a vague sense that LGBT people are unfairly demanding special rights or protections and that in the process, they are fundamentally altering our society for the worse. In other words, they feel that our society is under attack, and they sometimes lash out in response.

Q: While marriage equality was a big milestone, much remains to be done in the area of LGBT rights. What’s next?

A: The broader LGBT rights movement has been one of the most successful social movements since the 1960s, and today, it remains one of the most powerful movements in existence, ready to mobilize and lobby for any issue at any moment. Many feared that the LGBT rights movement would slow down or fade away following the Supreme Court’s Obergefell decision, but I see no evidence that this is happening. On the contrary, the LGBT rights movement remains active and vibrant, and I expect to see it take up a number of issues in the next several years. One is violence against LGBT people, which continues at very high rates. In fact, according to a recent New York Times article, LGBT people are more likely to be the targets of a hate crime than any other minority group. And in addition to education and outreach, I expect that activism on this front will take multiple forms. For instance, given the recent tragedy in Orlando, I would not be surprised to see some of the national organizations support stronger gun control laws.

To some extent, this is already happening, but I also expect that protecting LGBT people from employment discrimination will become a priority. Many states and localities already guarantee such protections, but many do not; in far too many places, it is still legal to discriminate against LGBT people in hiring and firing, compensation and promotions. Some version of the Employment Non-Discrimination Act (ENDA) has been introduced to almost every U.S. Congress since 1994, but it has yet to pass. Given that public support for the bill is strong, I expect that the LGBT rights movement will make a push to finally see it passed at some point in the near future.

Indeed, much remains to be done.