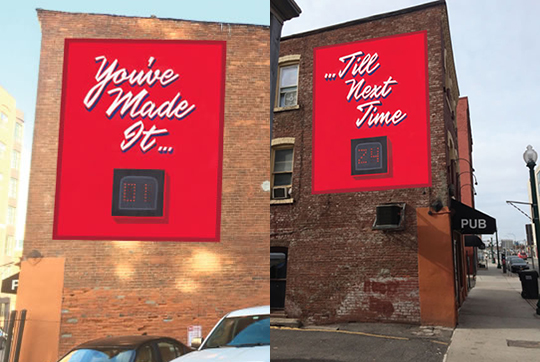 Jon Bocksel is contributing two 16 by 13-foot murals that will engage passersby both entering “You’ve Made It …”) and leaving (” … Till Next Time”) Armory Square. The paintings are an homage to Syracuse’s long history in the sign trade and the invention of the 24-second shot clock that revolutionized basketball.

The Syracuse Connective Corridor’s “Summer of Public Art” begins this month and continues into October with 11 new pieces of permanent public art to be installed along the Corridor. Some are three-dimensional pieces, and others are hand-painted typographic murals. Work on the first installation—a two-part mural at 321 W. Fayette St. by Jon Bocksel of Hand Signs—is underway.

The project is managed by Quinton Fletchall ’13, G’15 working for SU’s Office of Community Engagement and Economic Development. A steering committee oversees the project and includes representatives from the College of Visual and Performing Arts (VPA), the Syracuse-Onondaga County Planning Agency, the Downtown Committee of Syracuse, CNY Arts and the Syracuse Public Art Commission. Funding is via grants provided by Empire State Development and the Dormitory Authority of the State of New York.

Following months of planning, the Connective Corridor held two public art calls in early 2015 to seek artists who could create new original installations for Syracuse. The first call was a $650,000 contest, which received 276 applications from local to international artists from 17 countries. An 11-person jury narrowed down the submissions to 16 semi-finalists in April 2015.

The jury weighed input from area residents who participated in a community outreach session in early May 2015. Attendees learned about the semi-finalists and saw and evaluated the artists’ work. They were also encouraged to talk about where they’d like to see public art along the Connective Corridor and were invited to help develop questions for the jury to ask in its subsequent two days of interviews with the artists later in the month. 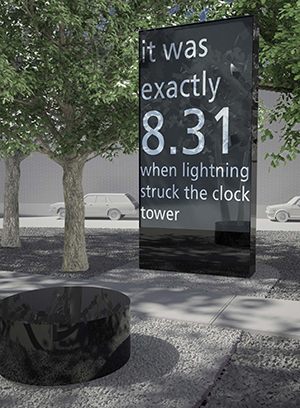 Marek Walczak and Wesley Heiss created a playful clock of sorts that changes content every minute, telling stories about time.

One important conversation that arose during the community meeting was the selection of local versus non-local artists. Some community members thought it was important to support local artists, while others saw the call as an opportunity to bring new artists to Syracuse. The jury agreed with both perspectives, and after careful consideration, six commissions were awarded in June 2015 to: DeWitt Godfrey of Earlville, N.Y.; Marek Walczak & Wesley Heiss of Allentown, Pa.; SU faculty member Sam Van Aken of Syracuse; BJ Krivanek and Joel Breaux of Chicago and LaFayette, La.; Erwin Redl of Bowling Green, Ohio; and Blessing Hancock of Tucson, Ariz.

The second public art call was a $150,000 direct call to prominent and up-and-coming sign painters. Four painters were selected initially in April 2015: Jon Bocksel of Brooklyn; Cayetano Valenzuela of Syracuse; Josh Luke of Jamaica Plains, Mass.; and Mike Meyer of Mazeppa, Minn. A fifth sign painter was later added: Steve Powers of New York City. Powers is the artist behind the 2010 “A Love Letter to Syracuse” project, which transformed several downtown bridges into works of striking public art.

“This season of public art will be very exciting for Syracuse residents and students of SU,” says Vice President of Community Engagement and Economic Development Marilyn Higgins. “We are proud of the partnerships between the community and the academy that are making this possible.”

“The Connective Corridor has already dramatically upgraded our urban streetscape,” adds Assemblyman William Magnarelli. “The teamwork on this public art program is a tremendous town/gown success story and will help brand the City of Syracuse as a progressive place to live and invest.”

Since last June, the project team has been working with the artists, the City of Syracuse, the University and private property owners to select sites and develop the artwork. Most of the artists have their sites selected and concepts near completion, and are readying for installation.

Fletchall believes the selection of artwork to be unveiled this summer offers a breadth of designs that offer something of appeal to everyone. He hopes people will enjoy the art and want to see more of it in Syracuse, thus identifying Syracuse as a city that is welcoming to public artists. 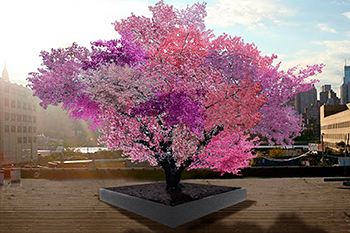 A grove of eight of artist Sam Van Aken’s “Tree of 40 Fruit” trees will be planted outside the Everson Museum.

In addition to its benefit to the community, the project has offered a learning opportunity for SU undergraduate and graduate students in the form of a two-semester class taught by School of Art instructor Tom Hall. The goal of the class was to teach students about public art calls both from artists’ and administrative perspectives.

During the Fall 2015 semester, the students learned about developing and releasing requests for qualifications/proposals, forming a jury and deciding on finalists. They also learned how to apply to open calls, interview and develop site-specific installations. Students in this past semester’s course gained hands-on experience by developing proposals for a temporary public art installation and presenting their ideas to the City of Syracuse’s Public Art Committee.

During both semesters, the students met with the Summer of Public Art finalists, talking with the artists about their careers and how they approached their work, and picking up advice for how the students could start their own careers.

A public event will be held in the fall to recognize the artists and celebrate the completion of all the installations.

For more on the Summer of Public Art visit http://connectivecorridor.syr.edu/PublicArt.