Research Suggests Further Strengths in Perception of Individuals with Autism 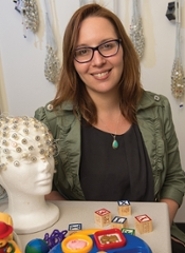 Researchers in the Center for Autism Research in Electrophysiology (CARE) Lab in the College of Arts and Sciences have made some important findings in looking at how children with autism process what they see.

The results reveal more evidence of heightened perception among children with autism, which could help explain some symptoms of autism. The findings were published in the Journal of Autism and Developmental Disorders.

“These results suggest that some of the perceptual strengths that are unique to individuals with autism are present both when looking at information over space, as well as over time,” says Assistant Professor Natalie Russo, director of the CARE Lab. “Many theories of autism suggest that temporal processing is atypical, or worse than among typically developing individuals. Our findings put some of this into question, but more research is needed to confirm or refute this.”

Russo, who is the principal investigator, conducts behavioral and psychophysiological research to understand how typically developing children, children with developmental disabilities and children on the autism spectrum process and integrate sensory information.

Housed in the Department of Psychology, the lab focuses on looking at individual differences in sensory, perceptional and cognitive processes associated with autism spectrum disorder (ASD), a group of developmental disorders that affects one out of every 88 children.

Russo’s current research is funded through a $2 million grant from the National Institutes of Health.

The latest published findings focused on how well and how quickly participants—children with and without autism and typically developed adults—were able to detect the identity of a letter when it was presented either with numbers or with different colored letters.

Humans are able to see specific targets among distracting objects in space and across time. However, recent studies indicate children with autism may be better than their typically developing peers at seeing targets in space—such as finding a “T” among a group of “L”s.

Russo’s group wanted to see if this was also true across time as well.

Participants in each of the three test groups were shown a sequence of images one at a time that showed numbers, with a single letter presented as a target—or images that showed letters, with a differently colored letter as the target.

Researchers were able to examine not only the differences between the groups, but differences in processing categorical information (letters vs. numbers) relative to feature information (color of letters). They found that children with autism performed as well as adults in the color task at the fastest—and therefore most challenging—rate of presentation, whereas all groups performed similarly in the category task.

“The research shows that children with autism are able to pick up on information that requires binding of a feature—a color—with a shape—a letter—better than their typically developing peers,” says CARE Lab postdoctoral associate Carl E. Hagmann, who is the first author on the paper in collaboration with Russo.

Others involved in the research include graduate student Nicole Shea, who helped with the diagnosis of participants, and lab manager Megan LeBlanc, who was instrumental in organizing data collection, Hagmann says. Wendy Kates, a psychiatrist at Upstate Medical University, and Brad Wyble, a former professor in the College of Arts and Sciences, who is now at Penn State, helped design the experiment.