Syracuse University alumni Jim Brown ’57 and Maj. Gen. Peggy Combs ’85 have been selected for induction into the inaugural class of the U.S. Army ROTC National Hall of Fame and will be recognized today, June 10, in a formal ceremony at Fort Knox, Ky., commemorating the 100th anniversary of the establishment of ROTC. 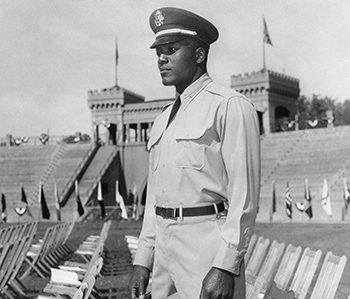 A highly respected leader, All-American athlete, actor and business executive, Brown was commissioned as a second lieutenant through Army ROTC.  Shortly after graduating from Syracuse University, Brown entered the National Football League (NFL) draft. During this time as an NFL player, Brown continued his military training commitment at Ft. Benning, Ga., as an Army Reserve officer. Brown continued his military service for four more years and was eventually honorably discharged from the Army Reserve with the rank of captain.

Brown’s distinguished professional career as an NFL player speaks for itself. In 1957, the Cleveland Browns selected Brown with the sixth overall pick in the NFL draft. Brown not only took Rookie of the Year honors but also captured the league rushing title and Most Valuable Player Award, all in his first year while still serving as an Army Reserve officer. Through his commitment to service, Brown exemplified the character and commitment expected of a leader and officer in the United States Army. Over the next eight years, Brown led the league in rushing seven more times, was elected to every Pro Bowl, and won three more Most Valuable Player awards. 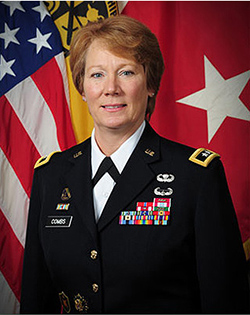 Combs is a respected general officer, chemical officer, mentor and leader whose contributions to the nation are exemplary. Commissioning in 1985 from Syracuse University, Combs embarked on a 31-year career of dedicated service. Over her career, she served in numerous leadership and staff positions at all levels of the U.S. Army, from tactical to strategic. Combs is also a veteran of Operations Enduring and Iraqi Freedom, having served as the Joint Nuclear, Biological and Chemical Operations Officer for U.S. Central Command (CENTCOM) and as the chief of staff for the Iraq Training and Advisory Mission.

Given her demonstrated senior leadership, the U.S. Army selected Combs for command of Fort Knox and the U.S. Army Cadet Command (USACC CG) in March of 2014. Combs was the first and only female to be appointed to this position. As the USACC CG, Combs modernized cadet command in the areas of training and development. Under her command, all cadet summer training (CST) was moved to Fort Knox. This move allowed for more efficient CST operations, command and control, and improved the level of training for cadets. Combs has also overseen a redesigned cadet curriculum aimed to develop agile and adaptive leaders.

Combs sets the example for aspiring women leaders. Her passion for service rings clear as she once stated, “For me, soldiering is truly an affair of the heart. It really is about a love of service, a love of our country and the respect and love for our brothers-and-sisters-in-arms who serve with the same heart of service and commitment.”

“Major General Peggy Combs and Jim Brown have justly earned this esteemed honor,” states Syracuse University Vice Chancellor for Veteran and Military Affairs Mike Haynie. “Their character, service and achievements exemplify the spirit of ‘Duty, Honor and Country.’ They have made their fellow cadets, veterans and the military-connected community at their alma mater and across the country extremely proud.”