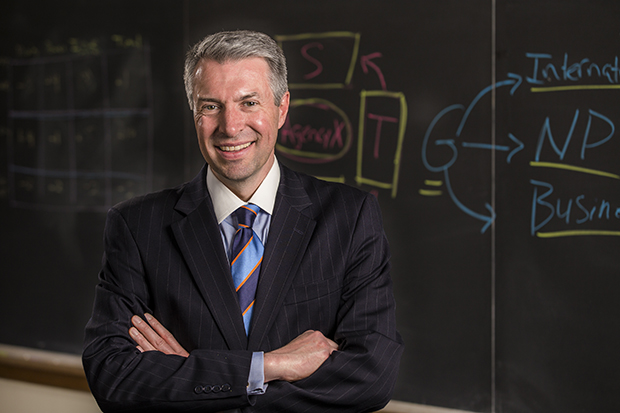 More than a decade ago, David Van Slyke joined the faculty of the Maxwell School of Citizenship and Public Affairs. Since then, Van Slyke has proven himself to be a distinguished scholar, an outstanding educator, successful researcher, a dedicated administrator and a passionate steward of the school. Today, Vice Chancellor and Provost Michele G. Wheatly announced that Van Slyke, who currently serves as Associate Dean and Chair of the Department of Public Administration and International Affairs, will become the next Dean of the Maxwell School. His appointment was approved unanimously by the Board of Trustees’ Executive Committee and is effective on July 1.

“In the short time I have been with Syracuse University, it is apparent to me that the needs and opportunities of the Maxwell School would greatly benefit from the leadership and capabilities of David Van Slyke,” says Wheatly. “He appreciates and values inclusiveness, respect and ambition and challenges his peers and students to make a difference for the future. I expect he will enhance the current programs while expanding international scope and impact by embracing the pressing and emergent questions and problems posed by rapid globalization and urbanization.”

Van Slyke, who earned dual tenure in the Maxwell School and the College of Arts and Sciences in 2007, holds the Louis A. Bantle Chair in Business-Government Policy. His academic focus has been on public and nonprofit management, government contracting, public-private partnerships, policy implementation and strategic management.

“David’s contributions to his department, the Maxwell School, and Syracuse University are extensive and impressive,” says Chancellor Kent Syverud. “I appreciate David’s willingness to step up and lead the Maxwell School. I look forward to collaborating with him in the weeks and months ahead. The Maxwell School represents the very best Syracuse has to offer, and I am certain that record of excellence will continue with David at the helm.”

“It is a great honor to work with the Maxwell School’s outstanding students, faculty, staff and alumni as dean,” says Van Slyke. He referenced the Athenian Oath in taking on his new duties, adding: “I am excited to serve in this important role as we pursue the school’s distinct contribution, to ‘transmitting the city not only not less, but greater, better, and more beautiful than it was transmitted to us.’ The Maxwell School’s ideals are excellence in deeply relevant scholarship, impactful teaching and informed service across the diversity of the social sciences and their integration with professional public administration and international affairs. My goal is to harness that collective excellence through active communication and engagement. Working together, we can create an intellectually vibrant environment that delivers value to researchers, decision makers and citizens.”

Van Slyke succeeds Dean James Steinberg, who announced in September 2015 his intention to step down as dean at the end of the 2015-16 academic year. Steinberg served as dean of the Maxwell School since 2011. He will remain at Syracuse and will continue to teach in the Maxwell School in his role as University Professor of social science, international affairs and law.

Van Slyke is a co-editor of the Journal of Public Administration Research and Theory and the Journal of Strategic Contracting and Negotiation. He serves on the editorial boards of several top-ranked public affairs journals and is active in his professional and local community. Van Slyke is actively engaged in the work of the Maxwell School’s Executive Education program and works extensively with senior leaders in government, nonprofit and business organizations in China, India, Peru, Singapore, Thailand and many other countries. Van Slyke is a leading international expert on public-private partnerships, public sector contracting and contract management, and policy implementation and has provided expert guidance to the Office of Management and Budget, the Government Accountability Office, the U.S. Coast Guard, and the World Bank. Prior to becoming an academic, he worked in the private, public and nonprofit sectors.

Van Slyke earned a Ph.D. in public administration and policy from the Rockefeller College of Public Affairs and Policy at the University at Albany, State University of New York.