As an undergraduate, Anthony Otero ’96 worked at the Schine Student Center. The job was such an influential part of his college experience that the English major accepted a student affairs position at Schine when he graduated from the College of Arts and Sciences, and spent the next 11 years working his way up the ranks. In 2012, he moved to Barnard College in New York City, where he is associate director of events management. 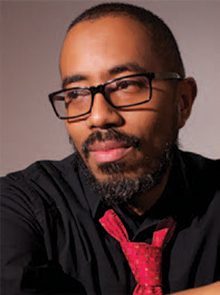 But Otero was always an active reader and writer. “I’ve always been somebody who has written things down, whether it was a journal in high school or short stories or random thoughts,” he says. “The idea was always in the back of my head that maybe one day I’d write a book, but it wasn’t necessarily something I thought would actually happen.”

Otero kicked things up in 2009. His marriage was falling apart and he needed a creative outlet. “I just started writing, and I found that the more I wrote, the better I felt.”

Otero started a blog (latinegro.wordpress.com), where he shared his perspective on male insecurities and divorce. He developed a following, and the feedback was positive.

On the verge of turning 40, Otero decided it was time to get serious about what his passions were and challenged himself to write a book. “There came a point where I wanted to stop talking about it and just do it,” he says.

The result was “Hanging Upside Down,” which he self-published in 2014. Inspired by events in his own life, the novel tackles issues surrounding divorce from a male point of view.

“I’d noticed that a lot of the narratives on divorce are female-driven. ‘The man did this; the man did that.’ And he probably did, but you don’t hear the why, or the other side of it,” he says.

Otero, who is president of the Syracuse University Latino Network, has challenged himself to write four books before he’s 50. He turned 42 in June, the same month he published his second novel, “The Book of Isabel,” which he describes as both a sequel and a prequel to his first book.

“It continues with the main character but also provides insight to things that happened earlier in his life,” says Otero, who continues to write short stories, a blog and occasional posts for The Huffington Post.

“I’m an emotional writer. When I’m in the mood, I need to write. When I’m in that moment, everything sort of pours out. I might write 10 short stories within two weeks. Then I have weeks without anything. It’s either flowing or it’s not, although I try to blog at least once a week,” he says.

Despite his passion for writing, Otero says he still loves working in higher education, particularly any opportunity to mentor and advise students. The only reason he would leave student affairs would be to pursue an M.F.A. in creative writing.

“I’m not getting any younger. If I don’t follow some sort of passion or dream, as I advise students to do, what’s the point?” says Otero. “My advice to others is that it’s never too late to pursue something that brings you meaning.”