Hub Brown, associate dean for research, creativity, international initiatives and diversity and associate professor of broadcast and digital journalism in the Newhouse School, is the recipient of the Larry Burkum Service Award from the Electronic News Division of the Association for Education in Journalism and Mass Communication (AEJMC). He will be presented with the award in August at AEJMC’s annual conference in Minneapolis. 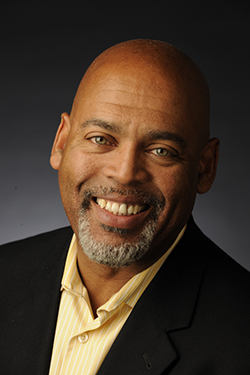 The award recognizes an electronic journalist or journalism educator who has demonstrated extraordinary service to journalism education. Brown is being honored for his work raising awareness about issues of diversity, both in journalism education and in the profession. For example, he often hosts “diversity sessions” at AEJMC and other conferences.

“I’ve always asked myself, ‘How do we report on and serve diverse audiences?’ There’s always a sense of urgency about it, as well as nervousness,” says Brown. “Conversation has become a bit of a minefield, it seems … The more we get a handle on it, the better we’re going to be.”

“This is an amazing honor but so well-deserved,” says Newhouse Dean Lorraine Branham. “Hub has been a strong advocate for diversity on so many levels and I am delighted to see his efforts recognized.”

“Hub helps each of us hone our skills across a broad array of critical areas facing 21st century journalism educators,” says Bill Silcock, head of the Electronic News Division of the ACEJMC. “As we celebrate 50 years as a division it is so fitting Hub is being honored for a great career of dedicated service to students, colleagues and professionals … Hub is a powerful role model.”

Brown was nominated for the honor by Nancy Dupont, professor of journalism at the University of Mississippi. She noted his dedication to the Electronic News Division as well as his accreditation reviews for the Accrediting Council on Education in Journalism and Mass Communications (ACEJMC). Brown has served as research chair and division head of the Radio/Television Journalism Division (now Electronic News) and was a nationally elected member of the AEJMC Committee of Teaching Standards and chair of the AEJMC Centennial Fundraising Committee. “Anyone who’s ever served on an ACEJMC accreditation team knows the grueling work it entails. Hub has served on 11,” says Dupont.

Brown has been a member of the Newhouse School faculty since 1996. Prior to that, he was a program host, writer and anchor for commercial and public television and radio stations. He has received several local and national awards for his professional work, including a Silver Hugo Award from the Chicago Film/Video Festival in 1989.