Tula Goenka G’86, associate professor of television, radio and film in the Newhouse School, has been named the Newhouse Endowed Chair of Public Communications for 2016-19. The position is awarded to a distinguished faculty member whose accomplishments significantly advance the school’s reputation in research and creative activity. 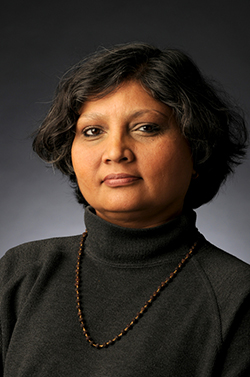 Goenka joined the Newhouse School faculty in 1996 following a career in filmmaking that included working as an editor for Spike Lee, James Ivory and Mira Nair, among others. Her own documentary work includes the award-winning PBS film “Dancing On Mother Earth,” about singer/songwriter Joanne Shenandoah; “El Charango,” about the musical instrument from Bolivia; and “Likhiya: Writing Stories With Mithila Art,” a series of short films on artists from Madhubani, Bihar in India.

In 2010, Goenka launched “Look Now: Facing Breast Cancer,” a project focusing on breast cancer survivors using a series of clothed and nude portraits and an accompanying documentary. Goenka, herself a survivor, was the first person photographed for the project, which aimed to break down the barrier between a survivor’s public persona and her private struggles with the disease. As the Newhouse Endowed Chair of Public Communications, Goenka plans to relaunch the project as an interactive documentary and website.

“Since its inception in 2007, this is the first time the Newhouse Endowed Chair has been awarded to a faculty member who pursues a creative research agenda, rather than traditional academic scholarship,” says Newhouse Dean Lorraine Branham. “We are excited to see where Tula takes this.”

“I am excited and grateful to have the time and resources to pursue ‘Look Now’ as an interactive documentary, the new frontier in storytelling,” Goenka says. “Interactive documentary is web-based and provides a non-linear, highly personal experience that gives individuals a chance to interact with the information when and how they need it, rather than a communal and linear experience in a darkened movie theater or on a TV screen.” Goenka’s multimedia project will focus on survivors’ personal stories and will be enhanced with responsive text, statistics and graphics.

Goenka will collaborate with a local epidemiologist to plot the pattern of breast cancer in Onondaga County. Her goal is to address the human rights aspect of access to health care, and how differences in income, race and ethnicity and geographic location can impact diagnosis, treatment and survival. She says, “Everyone has a right to have their story heard, and once the i-Doc is launched people can directly upload their own multimedia stories.”

Goenka is the author of “Not Just Bollywood: Indian Directors Speak” and the founder and co-director of the annual Syracuse University Human Rights Film Festival and Digital Witness Symposium. In 2008, Goenka created the SUBollywood summer program, offered through SU Abroad, which brings Newhouse students to Mumbai for a month-long immersion. She also co-created the annual SU Rising event, a candlelight vigil to stop sexual assault on the Syracuse University campus, and currently serves on the Chancellor’s Task Force on Sexual and Relationship Violence.