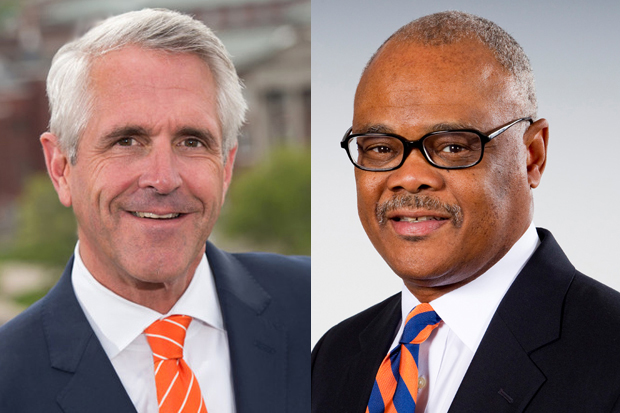 “I look forward to working with Dan French and Herm Frazier in the weeks ahead to continue building a winning athletics program centered around highly accomplished student-athletes,” says Chancellor Syverud.

French, a 1995 graduate of the Syracuse University College of Law, has served as the University’s general counsel since 2014. The Office of General Counsel is responsible for all the legal work arising from the activities of the University, and provides advice and counsel to University leaders, faculty and staff on the broad range of issues and topics. He is member of the Chancellor’s Executive Team and the Chancellor’s Council. Since 2014, French and his staff have restructured, managed and overseen the University’s Office of Athletic Compliance. He also played a key role in the development of the West Campus Project announced earlier this week. While French is serving as acting Director of Athletics, he will continue in his role as University General Counsel.

French previously served as United States Attorney for the Northern District of New York, where he was the chief federal law enforcement officer for 32 of New York’s 62 counties. French also served as an assistant United States attorney assigned to the criminal division in Syracuse. Additionally, he served as acting deputy staff director to the United States Senate Committee on Finance, and executive assistant to U.S. Sen. Daniel Patrick Moynihan.

“As General Counsel, Dan French has played an important role working with and supporting the Athletics Department during the past several years,” says Chancellor Syverud. “He has provided strong leadership, particularly overseeing the restructuring and enhancement of the University’s Office of Athletic Compliance, and developing the West Campus Project. He is the right person to lead the department during this time.”

“Herman Frazier has an impressive track record as an athletics administrator, and I am grateful for his leadership during this time of transition,” says Chancellor Syverud. “As a former Olympian, an All-American college athlete and a two-time college athletics director, Herm brings a wealth of knowledge and unique experiences to this new role. He is dedicated to the success and well-being of our student-athletes—both in the classroom and on the playing fields.”

An eight-time All-American track performer at Arizona State University, Frazier was the leadoff runner for the 1976 Olympic Gold Medal-winning 4×400 relay team. In 2004, Frazier was chosen Chef de Mission for the entire U.S. delegation at the Athens Olympics and presided over the most successful U.S. Olympic team in history with 103 medals.

Former Director of Athletics Mark Coyle informed the University last week that for family reasons, he was leaving the University for a position at Minnesota. The search for a new athletic director will commence immediately.