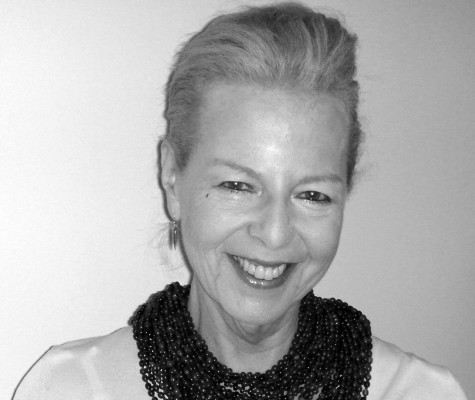 Judy Greenberg Seinfeld traveled last week to Syracuse University from her New Jersey home, both for Commencement and a meeting of the Board of Trustees. She remains deeply involved with her alma mater. She has returned many times since she graduated 60 years ago, in 1956.

This visit had particular resonance. On May 27, Seinfeld turns 80, a moment she does not view with foreboding. Instead, she sees that birthday as a cause for reflection and motivation. Seinfeld recalls her life as a series of professional or artistic transitions, great change that reinforces the core of who she is.

In a critical way, Seinfeld says, that process began at Syracuse.

“They offered me freedom, freedom to try new things, the overriding theme in my life,” she says. “I wasn’t a wild kid or anything, but no one said ‘no’ arbitrarily. These people have soul. They listened to what I have to say.”

It explains her deep involvement with the University. She particularly remembers the advice of James Smith, dean of the School of Education. “I took a class with him, and he used to tell us to think out of the box, that we could do anything,” she says. “He really gave us permission to think of things and to approach them in an original way.”

At graduation, Seinfeld received her diploma in the old Archbold Stadium, the crumbling predecessor to the Carrier Dome. She was only 19, the typical age today of a freshman or sophomore: She’d started college at 16, the result of accelerated schooling at Forest Hills, in Queens. She remembers that U.S. Rep. Sam Rayburn, speaker of the House of Representatives, was one of the Commencement speakers.

What Seinfeld recalls most vividly is seeing the trustees as they arrived, and how a single woman broke the ranks of solemn men. Seinfeld can’t be sure who it was; University records indicate there were three women trustees in 1956, including Ruth Stafford Peale, wife of Rev. Dr. Norman Vincent Peale.

Decades later, in a different era, Seinfeld stepped into the same role.

She is now a beloved and energetic trustee, a former chair of the academic affairs committee, creator of a uniquely inspiring fellowship. She has served on the Board of Advisors for the School of Education and the Board of Governors of Hillel at Syracuse. She also established the Seinfeld Housing Initiative at the School of Architecture, a three-year program meant to inspire future architects and designers.

When she left Syracuse, her goal was simply to find work as a teacher: She taught elementary school, went to graduate school for administration at Columbia and eventually became an assistant principal.

Yet when her father grew ill, she took the first great chance of her life: She left education to help run Balenciaga Parfums, the family fragrance business. All of this was in the 1960s and early 1970s, when women were finally beginning to shatter barriers of gender discrimination that had held them back for centuries. Amid it all, Seinfeld’s first husband, real estate investor David Greenberg, learned he had cancer. Someone had to step in and run his Heritage Management Company.

Seinfeld remembers the quiet confidence of her father, Alfred Halpern, “who always believed in me. And when someone believes in you, it means everything.”

She took on her husband’s business. She found herself at the same table as high-powered housing tycoons. Once, she recalls, a banker became so angry during negotiations that he hurled a pencil across a table.

Seinfeld did her best to stay true to what she calls her “compass.”

“My religion is kindness, bringing people together,” she says. In 2012, she met the Dalai Lama when he came to Syracuse, and she asked him if it’s really possible to love everyone.

He told Judy you’re not obligated to revere every aspect of someone’s behavior. “Find the 20 percent you can love,” he said, “and let the rest go.”

When she meets you, she looks hard for that 20 percent.

David Greenberg died after a long struggle with cancer. Seinfeld was left to raise their two sons, Steven and Jeffrey. At a time of such loss, she tried to set a fundamental example:

“Happiness,” she says, “is how you respond to suffering.”

Her children would eventually take over the real estate business. As for Seinfeld, she later married again: Her second husband was a “high school sweetheart,” Dr. Robert Seinfeld, a surgeon. They were both widowed. On their first date, a chance meeting, Robert Seinfeld told her she would someday marry him. She declined for a few years, until she had a revelation while the couple was visiting Cambodia:

Surrounded by beautiful art, by a sense of ancient culture and tradition, Judy Seinfeld allowed herself to step away from grief and hesitation.

She realized just how much she loved Seinfeld. They said their vows to a Greek captain on a ship on the Java Sea, south of Borneo. For the second time, she said, she married an extraordinary man. But her husband would die 15 years later, and once again Judy Seinfeld felt the need to be a model of how you handle loss:

“Get knocked down seven times,” she says, “and you get up eight.”

Ask how she defines herself, and she’ll say as an artist. She was an apprentice for three years to Vita Jaspin, a metalsmith. She was president for 13 years of the Judith Seinfeld Greenberg Gallery, which sold jewelry that she designed. She remains involved with the Theater Workshop of Nantucket, appearing in such productions as the “The Vagina Monologues” and “Born Yesterday,” while serving on the executive committee.

At 79, in what she sees as an accomplishment of special meaning, she’s published her first book of photographs: “Kind of Blue.” It focuses on finding beauty in an unlikely, even contradictory form:

The idea is taking age and turning it upside-down. The heart of the book is a sequence of images of an old bus in Texas, each capturing detailed patterns of elegance in rust. It is testament to the strength that comes with age, to the idea of seeing through a veneer, toward deeper beauty.

All of it intertwines with her gratitude toward Syracuse. Decades ago she took what began as a standard call from the University, a typical request for a donation. Lori Golden Kiewe, now senior director of development in the College of Law, listened to Judy, then said the University could benefit from her interest and loyalty.

“It was an alumni engagement call that led into so much more, because of the extraordinary person that she is,” Kiewe says.

The conversation triggered a cascade of events that led to Judy Seinfeld’s appointment to the Board of Trustees. She later served as chair of the Academic Affairs Committee, and she decided to create one of many lasting gifts for SU:

She provides funding for the Judith Greenberg Seinfeld Distinguished Fellowships.

The theme involves artistic and intellectual freedom, Judy Seinfeld says, a mission she always associates with her college years. “This felt more comfortable for me than investing in brick and mortar,” she says. “The idea is rewarding anyone who has shown great promise in any field, or someone who has climbed an extraordinary mountain.”

The fellowships, awarded for “a passion for excellence and exceptional creativity,” operate in three-year cycles. For two years, faculty members receive the awards. In the third year, two students are the winners. Judy met last week with Chancellor Kent Syverud to discuss the still-unannounced 2016 recipient. She also provides a scholarship within the School of Education for a student who has shown particular resilience.

Those awards, she says, go back to a simple lesson she learned from her father:

“When someone takes the time to say that you’re doing a great job,” she says, “it can take you far.”

In 2008, Julia Czerniak, who holds degrees in both architecture and landscape architecture, won a Seinfeld fellowship. Czerniak was still a junior member of the School of Architecture faculty, and she says the greatest element of being selected was sheer affirmation: “It was such a moment of someone believing in me.”

The fellowship allowed Czerniak to travel, to study waterfront planning in Louisville, Chattanooga and Baton Rouge. “I would never have been able to do without it,” Czerniak says. “I got the chance to spend six weeks just thinking and writing. It was incredibly important, an incredibly formative moment in my life.”

Once she met Judy Seinfeld, she understood the spirit behind the gift.

Looking ahead to her 80th birthday, Judy Seinfeld sees another chance to grow. While she has many goals left to achieve, she says she sometimes contemplates her own mortality. That reality triggers curiosity, not dread. She wants to face it in the same way that she embraces life—with a sense of dignity, joy and wonder about confronting the unknown.

“You take yourself wherever you go,” Judy Seinfeld says, a revelation that always brings her back to Syracuse.