Pellow Named Faculty Advisor of the Year by Arts and Sciences, Maxwell

Deborah Pellow, professor and undergraduate director in the Department of Anthropology, has been named Faculty Advisor of the Year for the College of Arts and Sciences and the Maxwell School of Citizenship and Public Affairs. 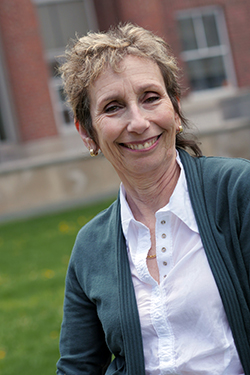 “Dr. Pellow is a fierce advocate for undergraduates, but one with a soft touch and warm heart,” says Kandice Salomone, associate dean for advising and career services in the College of Arts and Sciences. “She expects the best from students, always challenging them to meet their full potential, but always there to lend a helping hand.”

Pellow was nominated for the honor by John Burdick, chair of the anthropology department. “While my nomination is for AY 2015-2016, in truth Deborah has served as a caring advisor to undergraduates for the past four decades at Syracuse University,” he says. “I know this because they tell me.”

Burdick notes that Pellow knows the names of all the nearly 90 majors in the department. And in addition to getting to know them beyond what is strictly required, she does things like invite those who can’t make it home to her house for Thanksgiving dinner.

Pellow herself characterizes her Thanksgiving dinners as a form of paying it forward. “It’s impossible for me to reciprocate for an awful lot that’s been done for me, so this is one or two or three steps removed, but it works,” she says. “And it’s just so much fun.”

Fun is how Pellow classifies a lot of what she does for advisees. “I care about my field, and it’s a lot of fun being able to talk it up,” she says. “Students have that great energy, and that’s great to be around.” She adds that she’s always willing to go out of her way if the student is willing to follow suit.

And go out of her way she has. Kelton Sheridan recounts having to take off the fall semester of her junior year for surgery. “Not only did I receive emails from Professor Pellow wishing me a swift recovery, but she advised me from a distance on what classes to take my returning semester,” Sheridan says. When Sheridan fretted about not being able to graduate on time because of the missed semester, “She calmly told me not to worry, that I would absolutely graduate on time (despite having missed a semester). Then she proceeded to email the advising department on my behalf and fixed the problem.”

Jose Esteban Rodriguez III talks about Pellow’s willingness to participate in a program in the Brewster-Boland-Brockway complex to encourage first-year students to interact more with faculty members. She dined with residents at Brockway and even visited residents in their dorm rooms. “Residents see Professor Pellow as a fun, engaging and knowledgeable individual,” Rodriguez says.

Anthropology and biology student Soleil Young ’17 hadn’t even considered applying to be a college marshal until Pellow asked her if she wanted to apply. “Even though there was only a week until the deadline, she agreed to write me a recommendation and reached out to another professor of mine to ask on my behalf (given the short turnaround) if she could recommend me. I ended up [being named] Arts and Sciences College Marshal, and I feel indebted to Dr. Pellow for both encouraging me and advocating on my behalf.”

Carlotta Davis Flanigan sums up her strong feelings about Pellow when she says, “It may sound dramatic to say that it wasn’t until meeting and working with Dr. Pellow as an undergraduate that I met the person whom I would become, but I can assure you, it is the truth.”