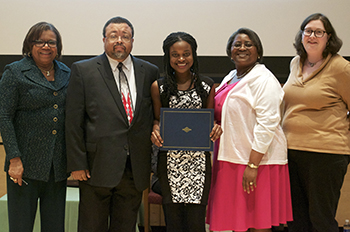 A graduate of the magazine, newspaper and online journalism (MNO) program, Milton worked as a community reporter in her hometown of Washington, D.C. On the night of May 27, 2015, she was shot and killed on her way home from an assignment.

The award was presented by Aileen Gallagher, assistant professor of magazine, at the Newhouse Awards Ceremony on Tuesday, May 3. Milton was one of Gallagher’s students.

“Charnice practiced ‘community journalism’—hyper-local news about real issues faced by everyday people,” Gallagher said at the ceremony. “Too often, community journalism is a euphemism for good news, but Charnice clocked hours at community meetings and asked tough questions of local leaders, holding accountable the institutions that mattered to the people of Southeastern D.C.

“We give an award in her honor not because she was murdered, but because she showed astounding personal courage on her journalism path. Charnice was a woman of great faith and a sly sense of humor. But social skills did not come naturally to her. She struggled with anxiety and with a speech impediment. The part of journalism that involves walking up to strangers and asking them questions is hard for a lot of us. For Charnice, reporting was a mountain she chose to climb every day.

“Her longtime editor called Charnice ‘a credit to the Newhouse School.’ Her mother told The New Yorker magazine that Charnice ‘took on topics that other people didn’t think were important. And they just became important, because she wrote about them.’”