‘Sound Beat’ Celebrates Fifth Anniversary on May 6 in Bird Library

The libraries’ public radio show, “Sound Beat,” celebrated its fifth year on the air this spring. To mark the occasion, there will be a celebration in Bird Library’s Learning Commons on Friday, May 6, from 2-4 p.m. 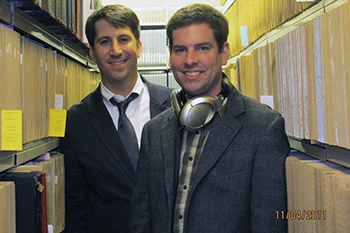 On hand will be the show’s host, Brett Barry, a two-time Newhouse alumnus and voiceover artist, and producer Jim O’Connor. The event will feature demos of the “Sound Beat” program and podcast, including episodes written by students as part of the Sound Beat Class Partnership. There will also be an opportunity for listeners to share comments for inclusion in an anniversary episode on the website. And, of course, cake!

“Sound Beat” is a quick trip through the history of recorded sound. Each episode focuses on one particular recording from the Belfer Audio Archive and provides a back story detailing its place in recording history. Featured recordings come from a wide range of periods and genres—popular and classical music, operatic works and film scores, as well as those distinctly American musical forms like jazz, bebop, country and bluegrass. “Sound Beat” episodes also feature recordings from some of the great thinkers, political figures and luminaries of the late 19th and early- to mid-20th centuries.

Coverage of the show has grown steadily and “Sound Beat” can now be heard on over 350 stations from coast to coast, including Canada, and as far away as the Philippines, reaching almost 5 million listeners. Stations carrying the show include WAMC/Northeast Public Radio and Jefferson Public Radio, (Pacific Northwest), each with over 1 million listeners, Texas Public Radio and AMI, a Canadian reader service delivered via cable to five million households.

Initial funding for “Sound Beat” was provided by SU Advancement and SU alumnus George Hamilton. The Savada family, donors of 200,000 78s to Belfer several years ago, established an endowment fund in 2015 to support “Sound Beat.” The show also garnered an NEA Arts on Radio and Television grant in 2012 and a Jon Ben Snow Trust grant in 2014.