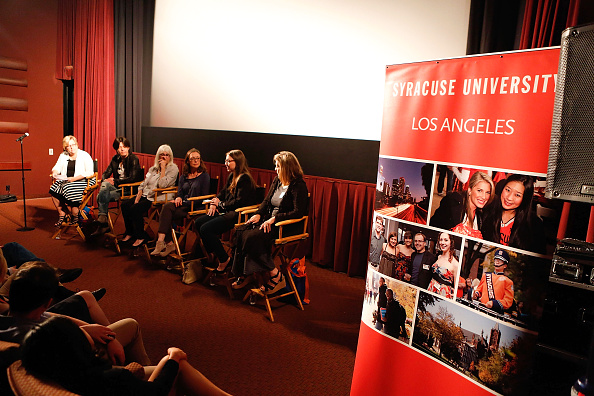 Students and alumni gather in Beverly Hills, Calif., for a panel discussion and screening of the film “Sophie and the Rising Sun.” The event was one of many organized for students participating in several immersion programs in Los Angeles during spring break. Members of the film cast and crew participated on the panel. (Photo by Randy Shropshire/Getty Images)

The big city sprawl of Los Angeles became local for dozens of students who met with professionals—including many alumni—in the students’ prospective fields during a week of immersion programs in the entertainment capital.

Students in five programs—in the Falk College of Sport and Human Dynamics, Newhouse School of Public Communications and the College of Visual and Performing Arts—spent a week traveling to various sites, making connections and learning firsthand about work being done in the entertainment, sport and public relations industries on the West Coast during spring break in March.

“My hope is that during this week our SU students will realize the opportunities that exist in Southern California and that we have an extensive network of Syracuse alumni who are engaged and willing to meet and help other Syracuse University students,” says Joan L. Adler, assistant vice president of regional programs in Los Angeles. 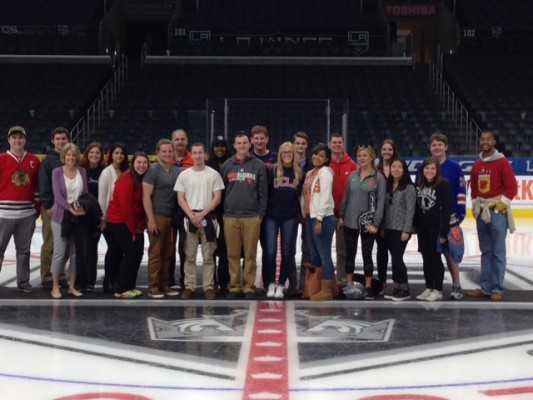 Sport management students in the LA Sports Immersion week took to the ice prior to an LA Kings game in the Staples Center.

For the sport management students, the intensive eight-day trip to Southern California experience is part of a course that allows them to interact with over 40 industry executives and practitioners from nearly every sector of the industry.

“The course is often a transformative experience for students because they are exposed to a multitude of opportunities in the vast world of sports,” says Michael Veley, Rhonda S. Falk Endowed Professor of Sport Management in Falk College and creator of the course.

“We’ve actually had four students who have taken the LA Immersion course, established professional contacts with key executives in organizations and obtained jobs as a direct result of this class,” Veley says. “As an educator, there’s nothing better than to see students follow their dream and achieve their career goal.”

All of the groups ventured into the LA area to visit sites that offered new insights and met with a variety of professionals. The Syracuse University Los Angeles (SULA) program plays a big role in helping plan and execute the various programs and helps handle logistics while students are visiting. The SULA office also provides space for the groups and is instrumental in connecting each of the groups with local alumni. 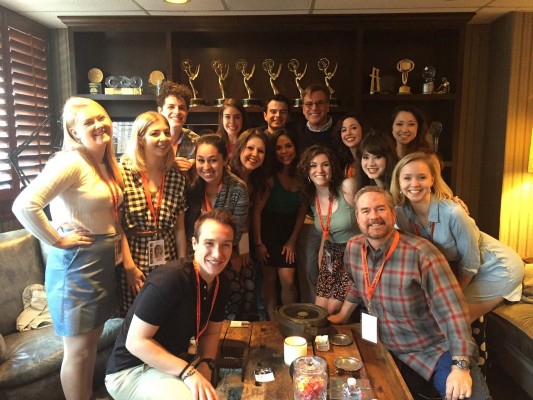 The Art in LA students attended gallery openings; visited the newly opened Broad contemporary art museum and met up with Marylyn and Chuck Ginsburg-Klaus, the program’s supporters, for a day of gallery and artist visits in San Pedro.

Students in the Rhetoric of Film program toured the Disney studies and visited the Motion Picture Archives, among other activities.

Students also attended a show at Geffen Playhouse and met with Playhouse Director and alumnus Gil Cates Jr. The group also had a looping/voice-over session, an evening at the Groundlings theater and a chance to be in the audience for the sitcom “Mom.” They visited casting sessions and met with managers, local actors, producers and entertainment executives.

“Most of those who the students in the Sorkin program met with were Syracuse University alumni, and not just VPA alums,” Adler says. “The alumni are all excited to be included in the events and meet with current students to tell their story of success from Syracuse University to LA.”

To bring together several of the immersion programs, the staff of the Syracuse University LA Center set up a special screening of the film “Sophie and the Rising Sun,” and a panel with the lead actor, casting director and producer, among others from the new film, after the showing. 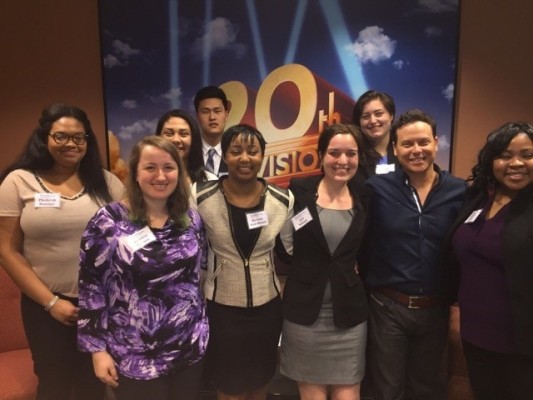