This week both houses of the U.S. Congress introduced a bill to reauthorize the Emmett Till Unsolved Civil Rights Crimes Act, which expires in 2017, in a bipartisan effort to continue the work begun by the Department of Justice (DOJ) in 2008. The participation and contributions of the Cold Case Justice Initiative’s (CCJI) co-directors and students were instrumental in this legislative development. 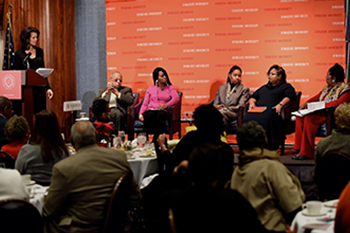 “For years now, the Cold Case Justice Initiative and the families who have lost loved ones to racial violence, and with whom we share the struggle for justice, have been pressing our government for full accountability,” says CCJI co-director Paula Johnson. “This development by the Unites States Congress is a step in the right direction, but it is only the first step in a new phase.”

“It was Dr. King who said the time is always right to do what is right,” says Rep. John Lewis. “We can never heal from the injuries of the past by sweeping hundreds of crimes under the rug.  We have an obligation, a mission and a mandate to continue the effort required to wash away these stains on our democracy.”

“I am honored to join Congressman Lewis to introduce this legislation to make it possible for the FBI and the Justice Department to continue their important work to investigate these cold cases and bring the perpetrators of racially motivated crimes to justice,” says Sen. Richard Burr. “Uncovering and confronting the truth about these crimes is essential to ensuring that no one is above the law and that all Americans are worthy of the protection of our laws.”

The Till Reauthorization Act includes a significant number of suggestions made by the CCJI which, along with its students, has been working with legislators for more than a year to ensure the push for justice and full accounting would go on. The reauthorization would allow this to happen. “I am glad to say this bill incorporates the advice and counsel of numerous individuals and groups who are also dedicated to the pursuit of justice in these matters,” says Lewis.  “Their tireless efforts have helped us improve this legislation so that more work can be done to end the pain, doubt and the inconsistent application of justice that has languished unattended for decades.”

While the reauthorization will allow investigators to continue their work beyond 2017, there are also other, substantial changes to address gaps in the previous bill, such as providing greater transparency in the process, a higher level of accountability for the DOJ to report on its progress, and allowing cases occurring in the 1970s, 1980s and beyond to be brought to justice.

“Perhaps most significantly to us is that the FBI will be required to travel to the communities to do their investigative work, not simply read over old files from a desk in Washington and make a couple phone calls” says CCJI co-director Janis McDonald. “The Emmett Till Unsolved Civil Rights Crimes Reauthorization Act reflects the realization that racial violence remains a destructive force and that the pursuit of justice has no deadline and cannot be compromised.”

The CCJI has watched recent violence, particularly the senseless violence and killings by police against citizens of color captured on camera, with a remarkable sense of déjà vu when looking at the nation’s dark history. “The long-forgotten victims of these racial crimes and their families are owed acknowledgement of their loss, accountability of perpetrators for their deaths and gratitude by our government and entire society for their ultimate sacrifices,” says Johnson.

“As we work to address current questions about racial violence and civil rights, we should be mindful of our history and why so many in the African-American community raise the issue of black lives matter,” says Rep. John Conyers. “Passage of the Emmett Till Act represented a commitment to resolving the unanswered questions from one of the darkest periods in modern American history. Reauthorization represents a further investment in our history and will allow the Department of Justice to resolve remaining issues and set to rest the ghost of the Civil Rights era.”

“Because many of these families have waited for closure 50 years or more, we urge Congress to move swiftly to reauthorize the act,” says McDonald.