Newhouse School alumna Meg LeFauve ’87 has made several contributions to the film industry in the past year. In addition to co-writing the Oscar-winning film “Inside Out,” she wrote “The Good Dinosaur” and is working on a screenplay for “Captain Marvel.” 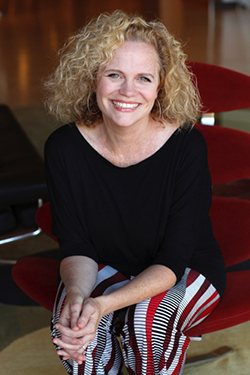 At Newhouse, LeFauve was enrolled in the television, radio and film (TRF) program with a dual major in English. She continues to use the knowledge she gained throughout her education. “What I learned the most is setting deadlines and that you have to keep trying,” she says. “You have to keep working at it and not be afraid to do that.”

One of the people who she says taught her the most was TRF professor Sharon Hollenback. “Sharon Hollenback taught me about screenwriting, but also about being a good person and following your gut,” LeFauve says.

Hollenback is aware of the difficult process that faces screenwriters like LeFauve. “Writing involves developing the concept, shaping it into a dramatic whole and then putting it onto paper and pitching it to people,” Hollenback says.

She remembers her experiences with LeFauve, recalling her as a superb mind and an independent thinker. “She was once challenged, often by deadlines, but Meg committed wholeheartedly and she works hard,” Hollenback says. “I don’t think she knows how distinctive she was.”

LeFauve took Hollenback’s advice and “followed her gut” all the way to Europe after graduation, then to New York City, then to Los Angeles as a creative executive at Jodie Foster’s Egg Pictures. LeFauve spent 10 years working with writers and directors while learning about storytelling from Foster, but she had yet to fulfill her passion for writing.

“The creative, aspiring part of me wanted to tell my own stories,” she says. “It was a privilege to help other people tell theirs, but I wanted to tell mine, so I quit, and then I had to do the hard work of learning.”

After quitting her job, she spent five years switching between production development and writing. She wrote scripts and gained learning experience while keeping Foster’s mantra in mind: “What’s the big, beautiful idea in here?”

Warner Bros. film studio eventually reached out to her to rewrite a movie script, which resulted in her working at Pixar, where she could further develop her ideas.

“Ultimately, I want to talk about the connection we all have as human beings and the human condition, and ask questions about it,” she says of her goals as a screenwriter.

One of the concepts that LeFauve was most inspired by involved sadness as the emotion that connects all human beings. The idea became the focal point of “Inside Out,” and even after the film’s Oscar win, LeFauve views her success in a different light.

“The biggest satisfaction I got was the effect the movies are having on the audiences,” she says. “I’ve had parents walk up and say that because of ‘Inside Out,’ they’re better parents.” A Los Angeles county psychiatrist who deals with trauma victims told LeFauve that “Inside Out” has made her job much more effective because she can access children’s emotions more easily. In addition, LeFauve says the special needs community has used the film to help reach children whose emotions might not be easily accessible.

“There’s no bigger reward that you could get than a movie that you had any small part of going out into the world and having that kind of effect on people,” LeFauve says.

Katie Czerwinski is a freshman magazine major at the Newhouse School.