At a recent career fair in his hometown of Troy, N.Y., Tom Nardacci ’96, advised high school students considering a media career to pursue a liberal arts degree. “It wouldn’t hurt them to take a business course,” he adds. 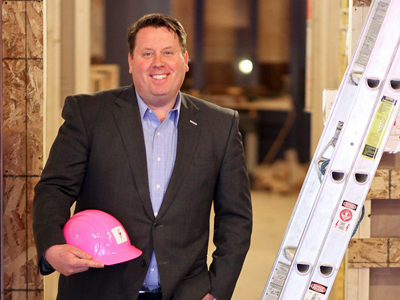 “If I had access to a space like this, my business would have taken off much more quickly,” Nardacci says. “These spaces are a natural way to cross-pollinate ideas. You have someone who is new sitting next to someone who has been in business 15 or 20 years.”

The Garage’s Creative Business Incubator program will allow six to 10 entrepreneurs to compete for free membership. Unlike the majority of co-working spaces and business incubators that cater to tech start-ups, the Garage focuses on creative businesses.

While studying at Syracuse, Nardacci didn’t plan on a public relations career. Instead, he pursued a history degree from the College of Arts and Sciences after a high school guidance counselor told him, “Do what you like.”

An interest in history led to his for first job: working on policy issues for former U.S. Rep. Michael McNulty in Washington, D.C. When his interest shifted to the communications end of politics, he became McNulty’s press secretary. He worked for several years in Albany in a similar role for former state Assembly Majority Leader Ron Canestrari.

“I learned to write taking major history topics and synthesizing the information for papers,” he recalls.

He later earned a master’s degree in strategic communications from Columbia University and worked PR jobs in Manhattan. When he and his wife returned to the Albany area in 2006, “I just decided to hang out a shingle,” he says. His firm now employees 15.

Gramercy Communications will operate out of about a third of the Garage’s 14,000 square feet. The building housed a Pierce-Arrow car dealership in the early 1900s. Nardacci calls his new initiative the Garage as both a nod to the building’s history and the tradition of people starting businesses in their garage. Participants in the Creative Business Incubator must host one social or educational event each month. That’s part of the company’s commitment to social entrepreneurship—a business model that seeks not just to make profits, but to improve the world.