Megan McClellan will graduate from the University in a few weeks with a major in food studies and a minor in nutrition, both from Falk College, and she would like to turn those into a career working for a health food company. Her goal is to help improve the diets of Americans. 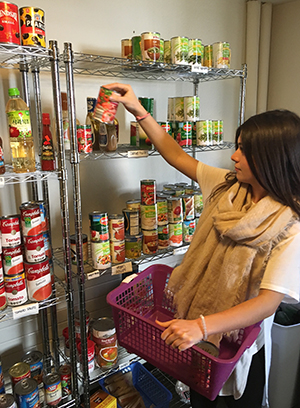 She has already taken the first steps on that road with her internship at the Hendricks Chapel food pantry. The pantry exists to help SU and ESF students who do not have enough to eat.

“Our school is considered expensive, so people assume everyone here must have enough money for food,” McClellan says. “But students will put a lot of things ahead of food, like textbooks and having a normal social life. Also, a lot of students who feel they are adults feel guilty still taking their parents’ money, so they go without basics like food.”

The Hendricks food pantry is open seven days a week for any student who feels the need to use it, and no appointment is necessary. “We don’t turn anyone down,” McClellan says. She adds that there are no forms to fill out to prove that you need help. “We believe you.”

One of McClellan’s goals as an intern at the food pantry is to increase the pantry’s visibility, both to increase donations and to increase the number of students who use the resource. She would like to increase the number of places around campus where people can drop off donations for the food pantry, such as in the Department of Nutrition and Food Studies Office, Falk College Whitehall Floor 5, and perhaps at some sorority houses. She would also like to get permission to put up a donation table at some events. She would also like to look into partnering with grocery stores in the area, such as Trader Joe’s, to receive leftover groceries.

The food pantry will take most food donations. Non-perishables are easiest, such as canned food, rice and pastas, but the pantry also accepts produce, condiments and even personal hygiene items. They can be dropped off in the Hendricks Chapel Dean’s Office, 003 Hendricks Chapel.

McClellan is also trying to reorganize the food pantry to make the organic options more accessible. But when all is said and done, she just wants all students to be able to have enough good food to eat. “People shouldn’t have to make a lot of money to be able to eat healthy food,” she says.