The ninth annual Wynn Newhouse Awards Exhibition runs through May 14 at Palitz Gallery, located in Syracuse University’s Lubin House at 11 East 61st St., New York City. The exhibition that was created to draw attention to the achievements of artists of excellence who have disabilities. 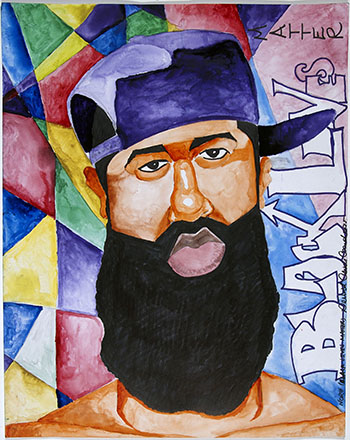 A work by Derrick Coard

Each of the award winners receives a portion of a $60,000 per year allotment from the Samuel I. Newhouse Foundation, and this year 15 works including watercolor, works on paper, acrylic on canvas and mixed media. The grant winners include Derrick Alexis Coard, Courttney Cooper, Nick Dupree, Carolyn Lazard, Dan Miller, Alice Sheppard and Constantina Zavitsanos.

Nearly half of the artists in this exhibition are represented by organizations that support artists having disabilities.  Healing Arts Initiative, which works with Coard, exists to remove barriers to arts and culture. Miller is represented by Creative Growth Art Center, an organization that serves adult artists with developmental, mental and physical disabilities while providing a professional studio environment for artistic development. Visionaries + Voices emerged in 2001 and in 2003 became a full nonprofit that organizes shows and presents the work of artists with disabilities. V+V is now a home for hundreds of artists in and around Cincinnati, including Cooper.

Nominees and winners of the Wynn Newhouse Awards are chosen by a committee, composed of persons respected in the arts and disabilities communities, who review all submissions. This group also decides how the grant money will be dispersed among the artists. The selection committee for this year’s awards was comprised of: Matthew Higgs, director, White Columns Gallery; Park McArthur, artist; Catherine Morris, curator, Brooklyn Museum, Elizabeth A. Sackler Center for Feminist Art; and Andrew Saluti, assistant director, Syracuse University Art Galleries.

Coard calls his art his voice for the human race. “I use bearded black men as symbolic expression for possible change for the African-American male community,” says Coard.

The artist considers his works an illustration that black male people can be victorious, achieving needed healing and unity. “My work is a testimonial that black men can be seen in a more positive, righteous light,” says Coard, whose work is among the collection at the Brooklyn Museum of Art. His works have appeared in exhibitions in Glasgow, as well as the Outsider Art Fair in New York City.

Cooper is widely recognized for drawing aerial views of Greater Cincinnati.  Cooper walks the streets of Cincinnati, committing the places he visits to memory. Culling observations for cartographic translation in the studio, Cooper creates maps based his observations built on pieces of 8.5”x11” repurposed paper, which he glues together, creating additional pictorial space as needed. “Bic pen” line drawings of Cincinnati neighborhoods undulate across the constructed surface. Translation of Cincinnati grows organically as both a manifestation of process and of place because Cooper’s practice creates a living document.

Dupree had always created drawings that even in the earliest scribbles his mother saw them as “sequential,” a panel or snapshot of people and things amid intense change. “Much of my artwork is still comic art, webcomics, ‘sequential art,’ though obviously with progressively more complex images and themes, exploring the fear of the other entwined with American politics and sanctuary for mutants in the action comedy,” says Dupree.

Since 2011 he has increasingly focused on painting, self-portraits and portraiture. 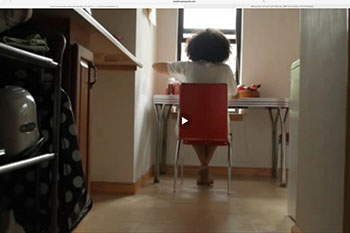 Still from a video by Carolyn Lieba Francois-Lazard

The works created by Francois-Lazard engage constructions of legibility and visibility. She says it begins with the impulse to document her life in biomedical purgatory.

“Chronic illness is often seen as a private matter or a hyper—personal misfortune,” says Francois-Lazard. It is rarely viewed as an experience deeply embedded in structures of power and meaning. As such, documenting chronic illness destabilizes the separation of public and private spheres.”

The artist makes work that takes an experience that is often circumscribed to the realm of the private, and makes it visible and sometimes banal.

Miller’s artwork is an intricate abstract biography that reflects his perceptions as a non-verbal autistic person. Miller has developed a working method that uses language as its primary subject and departure-point.

In Miller’s works, letters and words are repeatedly overdrawn, creating ink-layered masses that hover on the page and are built up to the point of illegibility or destruction of the ground. Each drawing thereby becomes a written recording of the artist’s obsessions, a visceral accumulation of texts and numerical sequences that often have strong personal references, e.g. aspects from his daily routine, names of people from his family history, or specific Bay Area locales.

Miller’s work is part of the permanent collection of the Museum of Modern Art, New York, Berkeley Art Museum, and the Collection De L’Art Brut, Lausanne.

“I begin with embodiment,” says Sheppard. “My wheelchair is not an adaptive device that I use for locomotion; it is not a tool that replaces my legs. I understand my chair as part of my body, even as I also claim that both in and out of my chair, my body is complete.”

For this performance artist, each push has aesthetic merit; it is part of her line. Each roll on the ground is a distinct choice.

“I create my movement language from three different vocabularies,” says Sheppard. “The movement enabled by my wheels, the movement arising from my impairment and movement drawn from the conventional languages of mainstream non-disabled dance.”

Zavitsanos works in sculpture, performance, text and sound. Her work deals largely in issues of debt and dependency, and asks how access, intimacy, opacity and fugitivity might transform processes of distribution and exchange. Zavitsanos views care as an infrastructural concern. She is deeply invested in the specifically informal surplus power of inconsequence and reproduction from which form arises, which is to say her work privileges art and object-hood, or aesthetics and social life.

Wynn Newhouse was a prominent and avid art collector who lost functional use of one hand in an industrial accident as a young man. By midlife he was diagnosed with multiple sclerosis. He envisioned The Wynn Newhouse Awards in 2005. The program provides grants to talented fine artists with disabilities as defined by the Americans with Disabilities Act. Newhouse was joined by top artists, curators and critics who shared his belief that many disabled people have unique insights and skills that can enhance their ability to create exciting art. He hoped that these exhibitions would enable the arts public to see the many creative ideas contained in their works. Wynn passed away in 2010.